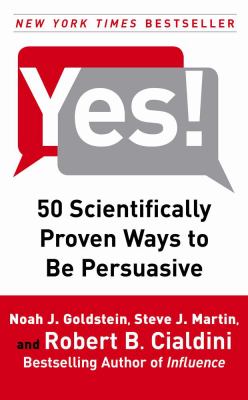 Introduction There's an old joke told by the nightclub comic Henny Youngman, who referred to his accommodations from the previous night by saying, "What a hotel! The towels were so big and fluffy I could hardly close my suitcase." Over the last few years, the moral dilemma facing hotel guests has changed. These days, the question of whether toremovethe towels from their room has been replaced by the question of whether toreusethe towels during the course of their stay. With the increasing adoption of environmental programs by hotels, more and more travelers are being asked to reuse their towels to help conserve environmental resources, save energy, and reduce the amount of detergent-related pollutants released into the environment. In most cases, this request comes in the form of cards placed in guests' bathrooms -- cards that provide some surprising insights into the remarkable science of persuasion. A survey of the persuasive messages conveyed by dozens of request cards from a wide variety of hotels around the globe reveals that these cards most commonly attempt to encourage towel recycling efforts by focusing guests almost exclusively on the importance of environmental protection. In other words, guests are almost invariably informed that reusing their towels will conserve natural resources and help spare the environment from further depletion, disruption, and corruption. To further draw guests' attention to the impact of towel recycling on the environment, this information is often accompanied by various eye-catching, environment-related pictures in the background, ranging from rainbows to raindrops to rainforests...to reindeer. This persuasion strategy generally seems to be an effective one. For example, one of the largest manufacturers of these signs, whose messages focus entirely on the importance of environmental protection, reports that the majority of hotel guests who have the opportunity to participate in these programs do reuse their towels at least once during their stay. But could the results be improved? Researchers are often on the lookout for ways to apply their scientific knowledge to make existing policies and practices even more effective. Much like a highway billboard that reads, "Place your ad here," these little towel recycling cards spoke to us, practically pleaded with us, to "Test your ideas here." So we did. And in doing so, we showed that just by making a small change to the way in which the request is made, hotel chains can do much, much better. As this book will reveal, starting with our towel experiments, small, easy changes to our messages and to our requests can make them vastly more persuasive. In fact, we're going to claim that everyone's ability to persuade others can be improved by learning persuasion strategies that have been scientifically proven to be successful. We will report on dozens of studies, some conducted by us, some by other scientists, that demonstrate this point in many different settings. Along the way, we will discuss the principles behind these findings. The central purpose of this book is to provide the reader with a better understanding of the psychological processes underlying our efforts to influence others to shift their attitudes or behavior in a direction that results in positive outcomes for both parties. In addition to presenting a variety of effective and ethical persuasion strategies, we also discuss the types of things to watch out for to help you resist both subtle and overt influences on your decision-making. The studies discussed in this book are scientifically rigorous, but they can also be fun. For example, we'll seek to provide insights about what single office supply can make your attempts to persuade others significantly more effective, what Luke Skywalker can teach us about being an influential leader, why people named Dennis are disproportionately more likely to become dentists, how slippiNoah J. Goldstein is the author of 'Yes!: 50 Scientifically Proven Ways to Be Persuasive', published 2008 under ISBN 9781416570967 and ISBN 1416570969.