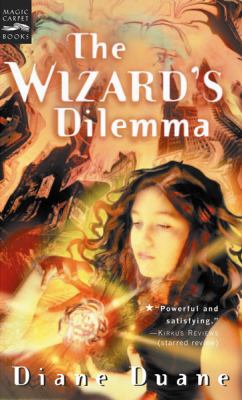 Friday Afternoon "Honey, have you seen your sister?" "She's on Jupiter, Mom." There was no immediate response to this piece of news. Sitting at a dining room table covered with notebooks, a few schoolbooks, and one book that had less to do with school than the others, Nita Callahan glanced over her shoulder just in time to catch sight of her mother looking at the ceiling with an expression that said, What have I done to deserve this? Nita turned her head back to what looked like her homework, so that her mother wouldn't see her smile. "Well, yeah, not on Jupiter; it's hard to do that . . . She's on Europa." Her mother came around and sat down in the chair opposite Nita at the table, looking faintly concerned. "She's not trying to create life again or something, is she?" "Huh? Oh, no. It was there already. But there was some kind of problem." The look on her mother's face was difficult to decipher. "What kind?" "I'm not sure," Nita said, and this was true. She had read the mission statement, which had appeared in her copy of the wizard's manual shortly after Dairine left, but the fine print had made little sense to her-probably the reason why she or some other wizard had not been sent to deal with the trouble, and Dairine had. "It's kind of hard to understand what single-celled organisms consider a problem." She made an amused face. "But it looks like Dairine's the answer to it." "All right." Her mom leaned back in the chair and stretched. "When will she be back?" "She didn't say. But there's a limit to how much air you can carry with you on one of these jaunts if you're also going to have energy to spare to actually get anything done," Nita said. "Probably a couple hours." "Okay . . . We don't have to have a formal dinner tonight. Everyone can fend for themselves. Your dad won't mind; he's up to his elbows in shrub right now, anyway." The buzz of the hedge trimmer could still be heard as Nita's dad worked his way around the house. "We can take care of the food shopping later . . . There's no rush. Is Kit coming over?" Nita carefully turned the notebook page she'd been working on. "Uh, no. I have to go out and see him in a little while, though . . . Someone's meeting us to finish up a project. Probably it'll take us an hour or two, so don't wait for me. I'll heat something up when I get home." "Okay." Her mother got up and went into the kitchen, where she started opening cupboards and peering into them. Nita looked after her with mild concern when she heard her mom's tired sigh. For the past month or so, her mom had been alternating between stripping and refinishing all the furniture in the house and leading several different projects for the local PTA-the biggest of them being the effort to get a new playground built near the local primary school. It seemed to Nita that her mother was always either elbow deep in steel wool and stain, or out of the house on errands, so often that she didn't have a lot of spare time for anything else. After a moment Nita heaved a sigh. No point in trying to weasel around it, though, she thought. I've got problems of my own. Kit . . . But it's not his fault . . . Is it? Nita was still recovering from an overly eventful vacation in Ireland, one her parents had planned for her, to give Nita a little time away from Kit, and from wizardry. Of course this hadn't worked. A wizard's work can happen anywhere, and just changing continents couldn't have stopped Nita from being involved in it any more than changing planets could have. As for Kit, he'd found ways to be with Nita regardless-which turned out to have been a good thing. Nita had been extremely relieved to get home, certain that everything would then get back to normal. Trouble is, someone changed the location of "normal" and didn't bother sending me a map, Nita thought. Kit had been a little weird since she got home. MaybeDuane, Diane is the author of 'Wizard's Dilemma', published 2002 under ISBN 9780152024604 and ISBN 0152024603.