Winds of Change Climate, Weather, and the Destruction of Civilizations 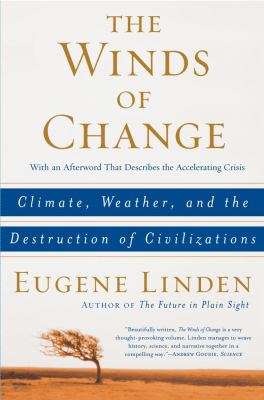 Preface I've been writing about nature and the environment since the early 1970s. I've watched as some environmental catastrophes have materialized, while with others it has been "Never mind." Lake Erie did not die as some predicted when I was a college student, and, as skeptics of global warming point out constantly, we have not begun a plunge into a new ice age, which was the prediction of some climatologists in the 1970s. On the other hand, even decades of insistent warnings could not prepare Americans for the actual horrors that Hurricane Katrina unleashed in August 2005. Turbo-charged by complacency, folly, and incompetence, Katrina destroyed a great city, transforming New Orleans into a septic stew of floating bodies, roaming gangs, disease, and toxic slime. The storm launched a wave of refugees not seen in the United States since the Dust Bowl, and the damage inflicted on crucial energy and transport infrastructure sent ripples throughout the economy. If there is a message to take away from a look back at past predictions of potential calamity, it is that the risks of erring on the side of caution tend to be fewer than the costs of dismissing predicted threats out of hand. Alarms about Lake Erie mobilized people and governments to take action, and in proving doomsayers wrong, the cleanup also created billions of dollars in value as the lake area became a draw for real estate and recreation. While in the United States officials took action to clean up the air and water beginning in the 1970s, elsewhere in the world environmental threats such as deforestation and extinction are more critical today than they were thirty years ago. Perhaps the most revealing aspect of this look backward to the early 1970s, however, is the threats that were not there, but which have since risen to prominence. Most prominent would be the possibility of climate change. In the late 1970s, climate specialists first started worrying about the possibility (and indeed a report submitted to President Jimmy Carter in 1979 was right on the money about noticeable changes in climate by the year 2000 if nothing was done to check emissions of greenhouse gases), but with the Iranian hostage crisis and stagflation dominating public concerns, the warning got little notice. The possibility that humans might be altering climate (performing a global experiment with us in the test tube, as some scientists put it) only became an issue in 1988, when Washington sweltered during an abnormal heat wave at the same time that Senator Timothy Wirth held hearings on the issue. Assignments have taken me to both polar regions and out into the Gulf Stream in attempts to keep pace with the science of this unfolding story. Since 1988, public concerns about climate change have waxed and waned with the weather, but in the United States at least, climate change has not been a pressing issue for the public despite periodic alarms raised by scientists. I have more to say about this in Chapter 18, but at least part of the problem is that, for all practical purposes, the threat is unprecedented. In this respect, our attitudes toward climate change are a little like American attitudes toward terrorism before September 11, 2001, or the attitude toward tsunamis of a tourist visiting Phuket, Thailand, before December 26, 2004. With regard to climate, it's hard to imagine that we puny humans could affect something so all-encompassing as climate itself; it's hard to imagine what it would mean if climate started changing everywhere on earth; and today even those Americans who view climate change as a threat see it as an event that lies far off in the future. After all, Americans suffer extremes of weather all the time without any long-term disruption of the economy. If climate change brings more extreme weather, the economy will absorb that too. Similar attitudes and such confidence might well have characterized the AkkadiLinden, Eugene is the author of 'Winds of Change Climate, Weather, and the Destruction of Civilizations', published 2007 under ISBN 9780684863535 and ISBN 0684863537.