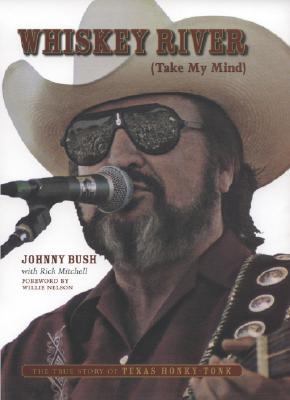 Praise for Johnny Bush and Whiskey River (Take My Mind): "Johnny Bush and I started out together... The story contained in this book is gospel." --Charley Pride "From the crown of his western hat down to the tips of his needle-nosed James Leddy cowboy boots, Johnny Bush is pure-D Texas from the get-go. His telling reads like a honky-tonk song, only real; you can hear the hurtin'', heartache, cheatin'', and pain in every word and feel the boot-scootin'' shuffle with every turn of the page." --Joe Nick Patoski, author of Selena: Como La Flor and Stevie Ray Vaughn: Caught in the Crossfire and writer for Rolling Stone and No Depression "Through his talents Johnny Bush has made a significant contribution to country music, and has given to his many fans the joy of magnificent music. You will enjoy meeting this creative man through this book." --Ralph Emery "I am as proud of Johnny Bush as I am of Willie Nelson, Roger Miller, and Johnny Paycheck--all Cherokee Cowboys alumni. I am especially proud of his triumph over his debilitating voice problem. This is the real story, told in his own voice." --Ray Price "From hard-time hungry Houston childhood to Nashville hit-making, from scuffling honky-tonk sideman to king of the Texas dancehalls, from victim of a strange career-killing illness to comeback kid, Johnny Bush has a Texas-sized story to tell about his life and times in country music. He tells it honestly, with humor and humility. Listen up when he speaks." --John Morthland, contributing editor, Texas Monthly, and former associate editor of Rolling Stone, Creem, and Country Music "Johnny Bush is one of my oldest and dearest friends. He and I started out together in music, and we''re stilltogether. Everything that''s been said about me in this book, good or bad, is pretty accurate." --Willie Nelson "I love Johnny Bush. He is classic Texas honky-tonk, one of our state''s treasures. Every honky-tonker out there has tried to sing like him, myself included. Thanks, Johnny, for being a true Texas original, and for your friendship." --George Strait When it comes to Texas honky-tonk, nobody knows the music or the scene better than Johnny Bush. Author of Willie Nelson''s classic concert anthem "Whiskey River," and singer of hits such as "You Gave Me a Mountain," "Undo the Right," "Jim, Jack and Rose," and "I''ll Be There," Johnny Bush is a legend in country music, a singer-songwriter who has lived the cheatin'', hurtin'', hard-drinkin'' life and recorded some of the most heart-wrenching songs about it. He has one of the purest honky-tonk voices ever to come out of Texas. And Bush''s career has been just as dramatic as his songs--on the verge of achieving superstardom in the early 1970s, he was sidelined by a rare vocal disorder that he combated for thirty years. But, survivor that he is, Bush is once again filling dance halls across Texas and inspiring a new generation of musicians who crave the authenticity--the "pure D" country--that Johnny Bush has always had and that Nashville country music has lost. In Whiskey River (Take My Mind), Johnny Bush tells the twin stories of his life and of Texas honky-tonk music. He recalls growing up poor in Houston''s Kashmere Gardens neighborhood and learning his chops in honky-tonks around Houston and San Antonio--places where chicken wire protected the bandstand and deadly fights broke out regularly. Bush vividly describes life on the road inthe 1960s as a band member for Ray Price and Willie Nelson, including the booze, drugs, and one-night stands that fueled his songs but destroyed his first three marriages. He remembers the time in the early 1970s when he was hotter than Willie and on the fast track to superstardom--until spasmodic dysphonia forced his career into the slow lane. Bush describes his agonizing, but ultimately successful struggle to keep performing and rebuild his fan base, as well as the hard-won happiness he has found in his personal life. Woven throughout Bush''s autobiography is the neveBush, Johnny is the author of 'Whiskey River (Take My Mind) The True Story of Texas Honky-tonk', published 2007 under ISBN 9780292714908 and ISBN 0292714904.