Ward No. 6 and Other Stories 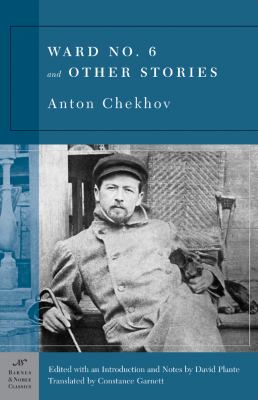 From David Plante's Introduction toWard No. 6 and Other Stories Anton Pavlovich Chekhov was born in 1860, and from his earliest childhood his father was, I believe, the greatest influence on him as a man and as a writer. As brutal as his father was, he was not stupid, and he insisted on the education of his children, assuming as a matter of course that his sons would somehow go on to university. And, dogmatic in his religious beliefs, he had a substantial collection of religious books that indicate his faith was informed by study. But Pavel Egorovich had bad luck. Circumstances beyond his control-a newly built railroad shifted the entire economy of the town to his drastic disadvantage-led to his having to close the grocery shop and to his escaping to Moscow, where his two elder sons were already studying, to avoid debtors' prison. There, he was only able to find work as a clerk in a warehouse (how interesting that Laptev in "Three Years" remembers working in a warehouse!), and his will was broken. It was at this point that his son Anton took over the responsibility of the family. Anton was sixteen, the same age as his father when he was freed from being a serf. Still a student in Tanganrog, he sold family furniture to pay for the fare of his mother and a younger brother and sister to Moscow, and, though not a very brilliant student himself, he tutored other students to earn money to send to his family. He seemed, too, to take on the moral as well as the financial guidance of his family. From Taganrog, he wrote to his younger brother Mishka, rather condescendingly: "You write well, and in the whole letter I have not found a single mistake in spelling," then, with moral authority, he lectured: "But there is one thing I do not like: why do you call yourself 'your worthless and insignificant brother?' . . . Recognize it before God; perhaps, too, in the presence of beauty, wisdom, nature, but not before men. Among men you must be conscious of your dignity and worth" (Letters on the Short Story, p. 291). Later, when he was himself living with his family in Moscow in a half basement apartment and attending the faculty of medicine at the University, he continued to help support the family: He added to the insufficient earnings of his father by writing what he called "stories, tales, vaudevilles, any sort of rubbish" (Life and Letters, p. 4) for periodicals. He had been introduced to editors by his older brother Alexander, who himself wrote for the periodicals, but Alexander and the next older brother Nikolai, a painter, had already taken to the drink that destroyed them. If, in becoming the financial and moral force of the family, Anton had taken on the tenacity of his father's will, he also became essentially different from him-in reaction, I'm tempted to say, to free himself from his father's dogmatic will. Anton had developed into a light-spirited, witty fellow who amused others with "all sorts of pranks and inventions" (Life and Letters, p. 3); he had become liberal; and he no longer believed in the religion that had been inculcated in him. And, unlike his father, Anton never imposed his will on anyone. In a sense, his was a negative will, for, absolute as it was, it kept him from imposing himself not only on others but on the characters of his fiction-he refused, in the name of what he believed to be absolute freedom from tyranny, to judge. He was as strict as his father was, though not in insisting on a dominating ideology; on the contrary, he insisted on freedom from any such ideology.Chekhov, Anton is the author of 'Ward No. 6 and Other Stories', published 2003 under ISBN 9781593080037 and ISBN 1593080034.

6 from $0.51
Loading marketplace prices 6 copies from $0.51 How does the rental process work?
View more