Walking in the Sacred Manner Healers, Dreamers, and Pipe Carriers-Medicine Women of the Plains Indians 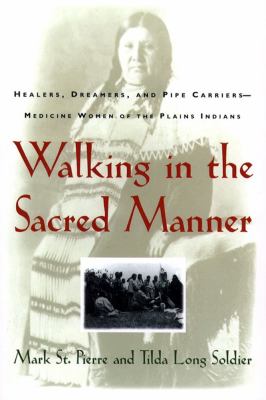 Chapter 1Healers, Dreamers, Pipe Carriers: Communication with the SacredAt a certain point in the ceremony while I am singing, I start to cry. They are not tears of sadness or joy, but recognition. I cry because I have the feeling, and I know "they" are there.Wounye'Waste'Win:Good Lifeways Woman,LakotaIf we look back far enough, we see that most cultures in the world had something similar to what in English is called a shaman, a specialist in communication with the spirit realm. Common threads in the fabric of shamanism everywhere in the world include the belief that an ordered spirit world exists, that all in creation, including man, have a soul that lives after death, and that communication with these spirits -- plant, animal, and human -- provides important information to the living. All remaining forms of shamanism, which has also been called "the original religion" and "the world's first and oldest religion," share certain ideas. All shamans believe that through drugs, specialized ritual, self-denial, or a combination of these a sacred altar can be created, a mysterious place and time in which direct communication with the spirit realm can be accomplished. In Latin this is called anaxis mundi,or a central axis to the universe, where the various layers or dimensions of creation and reality are brought close together.In some parts of the world shamanism remains a major force in the daily practices and beliefs of aboriginal peoples. In the Americas, Europe, Asia, and Africa, the hints of ancient shamanism remain in artifacts, cave paintings, and even regional variations of major religious denominations. Halloween is a good example of this blend of the Christian with the pre-Christian in our own Euro-American culture. The spirits of the dead -- skeletons and ghosts, our ancestors by impersonation -- come back on this special day to beg for their share of the harvest. The day is still celebrated, complete with the admonition of the spirits to abide by the ancient policy "trick or treat."Sensing and Understanding the SacredThe Sun Dance, in some form or other, is virtually universal to tribes on the northern plains. It is a ceremony in which men and women pledge one to four days of abstinence from food and water. They dance in the hot sun from morning until dark, even throughout the chilly night. Among the Lakota, the dancers may further vow to be staked through the skin of their chest or back to the Sun Dance tree (the stakes and cords representing human ignorance), or they may drag a buffalo skull or offer small pieces of flesh from their upper arm. These flesh offerings from the upper arm are generally a sacrifice made by women, although men may make it as well. The Cheyenne and Crow do not include flesh offerings in their Sun Dance. Suffering is a vital part of a successful Sun Dance. If a few of the dancers are fortunate, they may collapse and experience a vision.A vow is made a year before the dance in return for a spiritual favor or in petition for a favor, which may include such things as the healing of a sick family member or the safe delivery of a new child into the world. Although personal reasons for Sun Dancing vary, the community aspect of this ceremony is to pray for new life, that the (feminine) world might be green and bountiful with the male influence of rain. The outer arbor or shade of the Sun Dance lodge is round, made of pine or cottonwood boughs, or even plastic tarp, but always in the center is a tall cottonwood tree, specially selected by a party of male scouts, often including four virgins who count coup on the tree with sacred axes dipped in red earth paint to bless the tree. It is then cut, lowered to shoulder height, and carried back to the Sun Dance camp. Offerings, consisting of rawhide cutouts of a man and buffalo bull, as well as pieces of cloth into which tobacco has been tiedSt. Pierre, Mark is the author of 'Walking in the Sacred Manner Healers, Dreamers, and Pipe Carriers-Medicine Women of the Plains Indians', published 1995 under ISBN 9780684802008 and ISBN 0684802007.