Walk in the Woods Rediscovering America on the Appalachian Trail 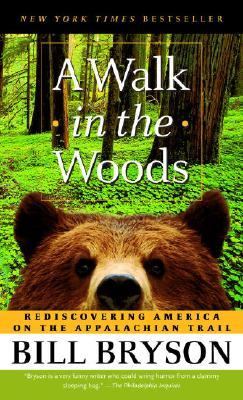 We hiked till five and camped beside a tranquil spring in a small, grassy clearing in the trees just off the trail. Because it was our first day back on the trail, we were flush for food, including perishables like cheese and bread that had to be eaten before they went off or were shaken to bits in our packs, so we rather gorged ourselves, then sat around smoking and chatting idly until persistent and numerous midgelike creatures (no-see-ums, as they are universally known along the trail) drove us into our tents. It was perfect sleeping weather, cool enough to need a bag but warm enough that you could sleep in your underwear, and I was looking forward to a long night's snooze -- indeed was enjoying a long night's snooze -- when, at some indeterminate dark hour, there was a sound nearby that made my eyes fly open. Normally, I slept through everything -- through thunderstorms, through Katz's snoring and noisy midnight pees -- so something big enough or distinctive enough to wake me was unusual. There was a sound of undergrowth being disturbed -- a click of breaking branches, a weighty pushing through low foliage -- and then a kind of large, vaguely irritable snuffling noise. Bear! I sat bolt upright. Instantly every neuron in my brain was awake and dashing around frantically, like ants when you disturb their nest. I reached instinctively for my knife, then realized I had left it in my pack, just outside the tent. Nocturnal defense had ceased to be a concern after many successive nights of tranquil woodland repose. There was another noise, quite near. "Stephen, you awake?" I whispered. "Yup," he replied in a weary but normal voice. "What was that?" "How the hell should I know." "It sounded big." "Everything sounds big in the woods." This was true. Once a skunk had come plodding through our camp and it had sounded like a stegosaurus. There was another heavy rustle and then the sound of lapping at the spring. It was having a drink, whatever it was. I shuffled on my knees to the foot of the tent, cautiously unzipped the mesh and peered out, but it was pitch black. As quietly as I could, I brought in my backpack and with the light of a small flashlight searched through it for my knife. When I found it and opened the blade I was appalled at how wimpy it looked. It was a perfectly respectable appliance for, say, buttering pancakes, but patently inadequate for defending oneself against 400 pounds of ravenous fur. Carefully, very carefully, I climbed from the tent and put on the flashlight, which cast a distressingly feeble beam. Something about fifteen or twenty feet away looked up at me. I couldn't see anything at all of its shape or size -- only two shining eyes. It went silent, whatever it was, and stared back at me. "Stephen," I whispered at his tent, "did you pack a knife?" "No." "Have you get anything sharp at all?" He thought for a moment. "Nail clippers." I made a despairing face. "Anything a little more vicious than that? Because, you see, there is definitely something out here." "It's probably just a skunk." "Then it's one big skunk. Its eyes are three feet off the ground." "A deer then." I nervously threw a stick at the animal, and it didn't move, whatever it was. A deer would have bolted. ThisBryson, Bill is the author of 'Walk in the Woods Rediscovering America on the Appalachian Trail', published 2006 under ISBN 9780307279460 and ISBN 0307279464.