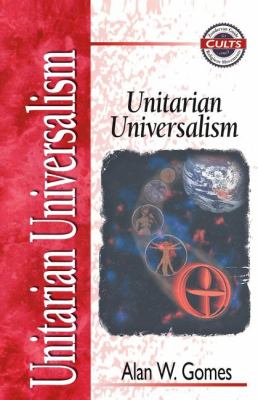 Unitarian Universalism Copyright © 1998 by Alan W. Gomes Requests for information should be addressed to: Zondervan, Grand Rapids, Michigan 49530 Library of Congress Cataloging-in-Publication Data Gomes, Alan W., 1955 - Unitarian Universalism / Alan W. Gomes. p. cm. - (Zondervan guide to cults and religious movements) Includes bibliographical references. ISBN 0-310-48891-5 (softcover) 1. Unitarian Universalist churches - Controversial literature. 2. Unitarian Universalist Association - Controversial literature. I. Title. II. Series: Zondervan guide to cults & religious movements. BX9847.G58 1998 289.1 - dc21 97-33441 CIP All Scripture quotations, unless otherwise indicated, are taken from the Holy Bible: New International Version®. NIV®. Copyright © 1973, 1978, 1984 by International Bible Society. Used by permission of Zondervan Publishing House. All rights reserved. All rights reserved. No part of this publication may be reproduced, stored in a retrieval system, or transmitted in any form or by any means-electronic, mechanical, photocopy, recording, or any other-except for brief quotations in printed reviews, without the prior permission of the publisher. Interior design by Art Jacobs Printed in the United States of America 98 99 00 01 02 03 04 05 /?DP/ 10 9 8 7 6 5 4 3 2 1 To my wife, Diane: Encourager, fellow traveler on the way Part I: Introduction I. What the Unitarian Universalist Association Is (UUA)? A. The Unitarian Universalist Association is an association of fellowships, churches, or societies1 that subscribe to certain broad principles and purposes and affiliate themselves organizationally with the UUA denomination, headquartered in Boston, Massachusetts. B. The names Unitarian and Universalist reflect the historical roots of the denomination. 1. Unitarian a. The Unitarians are so named because they denied the Trinity. b. The Unitarian movement with which we are concerned arose during the sixteenth-century Reformation. c. It spread from continental Europe (particularly Poland) to England and then to America. 2. Universalist a. The term Universalist refers to the salvation of all human beings. b. The Universalists opposed the doctrine of eternal punishment, teaching instead that God would save each and every human being. c. In the eighteenth century, Universalist teachings spread from England to America. 3. Merger of the Two Groups a. In America the Unitarians and Universalists developed cordial relationships, due to their similar beliefs and attitudes. b. The two groups merged officially in 1961, forming the Unitarian Universalist Association (UUA). c. Members of the Unitarian Universalist Association are often simply called "Unitarians." 4. The Unitarian Universalists should not be confused with the Unity School of Christianity or the Unification Church. C. The UUA is pluralistic, meaning that the group tolerates and even encourages within its ranks a wide diversity of belief. 1. For example, the UUA embraces theists, Neo-pagans, liberal "Christians," 4 religious humanists, atheists, and more. 2. Because of this wide variation in belief, a simple statement of UUA theology and practice is not possible. Nevertheless, this book presents and critiques the main forms of belief and practice found in today's UUA. See especially Part II, Section I.B. II. The Problem of Analyzing UUA Beliefs A. Factors Contributing to the Problem of Ascertaining UUA Beliefs 1. The pluralism of the UUA makes it difficult to define their beliefs. a. Some UUs favor a particular faith stance (e.g., liberal "Christianity"), though not to the exclusion of other faith stances. Other UUs mix and match different belief systems into one of their own. b. UUAGomes, Alan W. is the author of 'Unitarian Universalism', published 1998 under ISBN 9780310488910 and ISBN 0310488915.