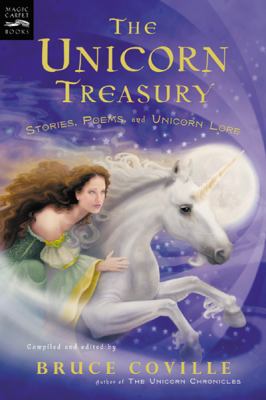 WHAT IS A unicorn? At first glance the answer may seem so obvious that the question itself is silly. Everyone knows that a unicorn is a horse with a horn stuck in the middle of its forehead. Right? Well, yes-and no. The answer is much more complicated, and considerably more interesting, than that. What unicorns actually do look like has been a matter of some dispute for several centuries now. Some old accounts give them white bodies and red heads, with a short, three-colored horn. Others give them elephant's feet, a boar's tail and other equally improbable traits. Oddly, while writers continued to disagree over what unicorns look like, artists kept coming back to the same basic idea: an animal much like a horse, but (in the better pictures) lighter and more graceful, with many goat-like qualities. In particular you should expect a unicorn to have a silky beard and hooves that are split, or cloven, like those of a goat. But even though we can describe a unicorn as having some of the traits of both these animals, in truth these creatures are far more magical than either a goat or horse could ever hope to be. Even the best descriptions fall far short of what you would see if you actually met a unicorn some moonlit night beneath an apple tree. (Not a bad place to look, by the way. Some unicorns are wisdom personified, and wisdom can, indeed, often be found beneath an apple tree on such a night.) Unicorns have many strange abilities. But of all the things they can do, it seems we are most fascinated by their power to heal. For the touch of a unicorn's horn can pull us away from death, toward immortality. Unfortunately for the unicorn, the horn retains its power even without a unicorn attached- which has led people to hunt it rather ferociously. The basic method for catching a unicorn is fairly simple. A pure young woman is taken into the woods and placed beneath a tree. Since unicorns are irresistibly attracted to such young ladies, if there is a unicorn in the vicinity it will come and lay its head in this maiden's lap. At this point she may sing to it, or slip a golden bridle over its head. Once the unicorn has been tamed in this manner, the hunters leap out from hiding and either capture or slaughter the beast. When they do, the greatest prize, of course, is the horn itself. (Though some people also believe there is a precious jewel, a "carbuncle," hidden underneath the horn.) The correct term for the horn is "alicorn," a word some people think was invented simply because "unicorn horn" sounds so awkward. Alicorns are among the most powerful of magical items. They were prized by popes and kings because they provided protection against all manner of evil, including epilepsy, pestilence and poisoning. A horn set in the middle of a table would begin to sweat, or form a dew, if any of the foodstuffs had been poisoned. Even a little powder filed from such a horn was an antidote to the most toxic substances. Small wonder that in a place like fourteenth-century Italy, where poisoning was a common way to deal with one's enemies, these horns were considered treasures indeed. As might be expected, an item both so valuable (horns sometimes sold for ten times their weight in gold) and so rare (some legends have it that there is never more than one unicorn on earth at a time) was a great temptation for frauds. With so many people selling false alicorns, it was necessary to find a way to determine which were real. Some of the tests included: o Drawing a ring on the floor with the alicorn. A spider placed in such a ring would not be able to cross the line, and in fact would starve to death trapped within the circle. o Placing the horn in water, which would cause the water to bubble and seem as if it were boiling, even though it remained cold. o Placing a piece of silk upon a burning coal, and then laying the horn on top oCoville, Bruce is the author of 'Unicorn Treasury ', published 2004 under ISBN 9780152052164 and ISBN 015205216X.