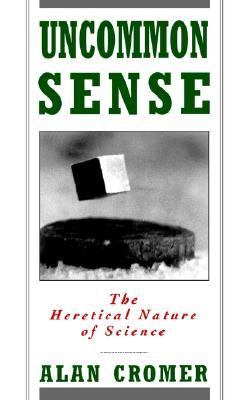 Most people believe that science arose as a natural end-product of our innate intelligence and curiosity, as an inevitable stage in human intellectual development. But physicist and educator Alan Cromer disputes this belief. Cromer argues that science is not the natural unfolding of human potential, but the invention of a particular culture, Greece, in a particular historical period. Indeed, far from being natural, scientific thinking goes so far against the grain of conventional human thought that if it hadn't been discovered in Greece, it might not have been discovered at all. In Uncommon Sense, Alan Cromer develops the argument that science represents a radically new and different way of thinking. Using Piaget's stages of intellectual development, he shows that conventional thinking remains mired in subjective, "egocentric" ways of looking at the world--most people even today still believe in astrology, ESP, UFOs, ghosts and other paranormal phenomena--a mode of thought that science has outgrown. He provides a fascinating explanation of why science began in Greece, contrasting the Greek practice of debate to the Judaic reliance on prophets for acquiring knowledge. Other factors, such as a maritime economy and wandering scholars (both of which prevented parochialism) and an essentially literary religion not dominated by priests, also promoted in Greece an objective, analytical way of thinking not found elsewhere in the ancient world. He examines India and China and explains why science could not develop in either country. In China, for instance, astronomy served only the state, and the private study of astronomy was forbidden. Cromer also provides a perceptive account of science in Renaissance Europe and of figures such as Copernicus, Galileo, and Newton. Along the way, Cromer touches on many intriguing topics, arguing, for instance, that much of science is essential complete; there are no new elements yet to be discovered. He debunks the vaunted SETI (Search for Extraterrestrial Intelligence) project, which costs taxpayers millions each year, showing that physical limits--such as the melting point of metal--put an absolute limit on the speed of space travel, making trips to even the nearest star all but impossible. Finally, Cromer discusses the deplorable state of science education in America and suggests several provocative innovations to improve high school education, including a radical proposal to give all students an intensive eighth and ninth year program, eliminating the last two years of high school. Uncommon Sense is an illuminating look at science, filled with provocative observations. Whether challenging Thomas Kuhn's theory of scientific revolutions, or extolling the virtues of Euclid's Elements, Alan Cromer is always insightful, outspoken, and refreshingly original.Cromer, Alan is the author of 'Uncommon Sense The Heretical Nature of Science', published 1995 under ISBN 9780195096361 and ISBN 0195096363.