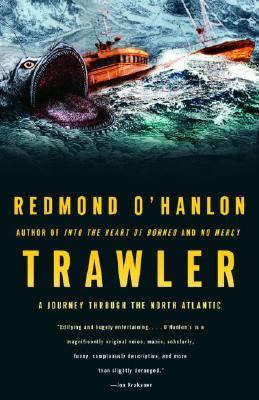 Chapter 1 Redmond, you've got to get up here, fast. There's a storm coming in, big style! I have the satellite maps. Force 11, maybe more. Straight for Orkney. And Jason, the Norlantean skipperhe's called on Cellnet. He's north-west of Shetland. He says the weather's horrendous. And getting worse. Perfect! Just what you wanted! He says we sign on at Scrabster, Saturday, two days' time, 7 a.m., no later. OK? Good. So pick me up at home19 Pilot Square, Fittie. Be there! And remembernothing green." The speaker was Luke Bullough, probably the toughest (and certainly the most modest) young man I'd ever met. A biologist at the Marine Laboratory, Aberdeen, a member of the Aberdeen lifeboat crew, he was a man with a vast experience of the real sea: as a research diver in Antarctica; as a Fisheries Patrol officer in the Falklands; on trawlers and research ships in the North Atlantic. Whereas me? Well, I've crewed very small sailing dinghies in races round plastic buoys in sheltered bays; and, oh yes, I almost forgot, I've taken passage on those cross channel car-ferries. So this is it, I told myself, as I sat heavily down on the chair beside the telephone, by the front door of the small, snug, safe, warm house; by the door that let on to the ancient, stable, peaceful, comforting landscape of Oxfordshire. Yes, here's the defining momentthe one telephone call you've spent nine months trying to persuade to come your way. And I know, I thought (my head, I'm ashamed to say, in my hands) I knowyou were all set to spend six or eight months in the swamp jungles of New Guinea; and how easy, how deeply attractive that now seemsmere rainforest, something you really do know about. But a year ago, my daughter Puffin, then twelve, became so ill she had to spend five months in the Oxford hospital for childrenand her wise National Health Consultant Mary Ellis (she'd seen it all before) said to me: "Redmond, no; you are so wrong; fathers do matter; and no, you can't disappear for eight months, not nowand, if you do, you may well have your daughter's death on your conscience." So I brought forward a secret, passionate project that I'd been saving for my Zimmer-frame old age: The Wild Places of Britain. And then months after the contract was signed, it dawned on me (a dawning horror) that yes, hang on, wait a moment, it's not that absurd, there really is a wild place in Britain, wild in world terms, wild however you look at it; and it's called the deep sea; the continental shelf edge, the abyssal plain, the British North-east Atlantic. A slow image of an imagined fear came back to me: eight-years-old, on a family holiday in Orkney, standing on the cliffs in a wind that you could lean against, looking out to sea, my father handed down his binoculars: "Look at that," he said. "And remember. Those men, they don't know it, but they're brave." Through the magical device, the lenses that let you make friends with the most distant birds, I got spookily close to a big blue trawlerone moment it was there on the upthrust of a wave, the next it was gone, surely for ever, into the trough. To be on that boat, I'd thoughtand being there became a recurrent childhood nightmareto be there, that's what fear must mean, that's what fear is. Eight years later, all of sixteen, after a tour round southern Ireland on my first motorbike, a 250cc. Royal Enfield ("Redmond O'Hanlon? TheO'Hanlon, Redmond is the author of 'Trawler ', published 2006 under ISBN 9781400078103 and ISBN 1400078105.

4 from $0.51
Loading marketplace prices 4 copies from $0.51 How does the rental process work?
View more