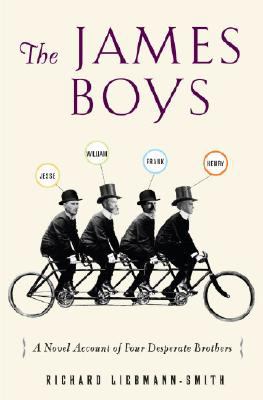 Chapter One At four-forty-five on the afternoon of July 7, 1876, the Number 4 Missouri Pacific Express, made up of two sleeping cars, three day coaches, and two baggage cars, pulled out of Kansas City, headed east for St. Louis. Among the passengers aboard that day, along with the usual contingent of rough-clad farmers, itinerant preachers, and high- collared Chicago drummers, was Henry James, who was completing a tour of the western states and territories he had embarked on six weeks earlier at the behest of John Hay, editor of The New York Tribune. Such journalistic journeys had become all the rage ever since the great linkage of the nation's eastern and western rail lines in 1869, opening the continent for commerce, settlement, and an exotic new brand of tourism that the railroad companies and newspapers hoped might appeal to wealthy Americans jaded with the fashionable Grand Tour of Europe. In fact, Henry was not so much completing his western tour as aborting it-cutting short his travels, as he complained to his editor, on account of "excruciating gastric distress." Indeed, the Jamesian digestive apparatus had been in chronic disrepair ever since its exposure a month earlier to the cuisine of St. Louis, a series of "desperate variations upon the inherently unpromising culinary theme of fried catfish." To make matters worse, Henry's back was killing him. In the terminology of today's psychiatry, the Jameses were notorious somaticizers: Their psychological conflicts often manifested in the form of such physical symptoms as painful digestive disturbances, crippling constipation, mysterious visual weaknesses, and blazingly aching backs. (William James, fresh out of the Harvard medical school, diagnosed his brother's spinal symptoms as "dorsal insanity.") In this instance, we might suspect that an underlying reason for Henry's distress-and Henry James was never one to deny any reason its fair weight and then some-was that the young author had come to realize he had neither talent nor taste for newspaper writing. "Try as he might," wrote his biographer Leon Edel, "Henry James could never speak in the journalistic voice. It was as if a man, fluent, suddenly reduced himself to a stutter." In his own mind, James was destined to be a great literary artist, not a newspaper hack, and his true vocation would hardly suffer a whit, he no doubt told himself, if he were never to describe another thundering herd of bison, painted Red Indian, or towering Rocky Mountain. Mark Twain could have the lot. Henry's idea of "roughing it" was any hotel under a two-star rating, and the truth, which must have been painfully apparent to him as he stared out over the western Missouri landscape described by Jesse James's biographer T. J. Stiles as resembling "a rug pushed into a corner: rumpled, wrinkled, rippled with ravines," was that all of that open space-those endless empty miles with scarcely a shanty, much less a cafe or cathedral to break the sheer geology of it all-had literally made him sick. Fortunately, the interior scenery of the coach was to prove far more to Henry's taste: Across the aisle from the writer sat a young woman who would soon introduce herself as Elena Phoenix and who would come to play a singularly significant role in the lives of the entire James clan. Though he scarcely could have been characterized as a ladies' man in the vulgar, predatory sense, Henry James was nonetheless a connoisseur of what he once described as the "more complicated" sex. Even at this early stage of his literary career, he had long since determined that womanhood, particularly the freshly emerging American strain, was to be a salient subject of his work. ("My Bible is the female mind," declares a diarist in Henry's 1866 tale "A Landscape Painter.") Like Winterbourne, the protagonist of Daisy Miller, Henry had a great relishLiebmann-Smith, Richard is the author of 'The James Boys' with ISBN 9780345470782 and ISBN 0345470788.