Thank You for Arguing What Aristotle, Lincoln, And Homer Simpson Can Teach Us About the Art of Persuasion 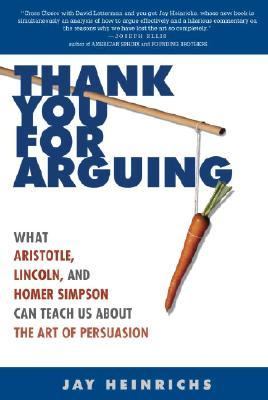 1. Open Your Eyes THE INVISIBLE ARGUMENT A personal tale of unresisted persuasion Truth springs from argument among friends.--david hume It is early in the morning and my seventeen-year-old son eats breakfast, giving me a narrow window to use our sole bathroom. I wrap a towel around my waist and approach the sink, avoiding the grim sight in the mirror; as a writer, I don't have to shave every day. (Marketers despairingly call a consumer like me a "low self-monitor.") I do have my standards, though, and hygiene is one. I grab toothbrush and toothpaste. The tube is empty. The nearest replacement sits on a shelf in our freezing basement, and I'm not dressed for the part. "George!" I yell. "Who used all the toothpaste?" A sarcastic voice answers from the other side of the door. "That's not the point, is it, Dad?" George says. "The point is how we're going to keep this from happening again." He has me. I have told him countless times how the most productive arguments use the future tense, the language of choices and decisions. "You're right," I say. "You win. Now will you please get me some toothpaste?" "Sure." George retrieves a tube, happy that he beat his father at an argument. Or did he? Who got what he wanted? In reality, by conceding his point, I persuaded him. If I simply said, "Don't be a jerk and get me some toothpaste," George might stand there arguing. Instead I made him feel triumphant, triumph made him benevolent, and that got me exactly what I wanted. I achieved the height of persuasion: not just an agreement, but one that gets an audience--a teenaged one at that--to do my bidding. No, George, I win. The Matrix, Only Cooler What kind of father manipulates his own son? Oh, let's not call it manipulation. Call it instruction. Any parent should consider rhetoric, the art of argument, one of the essential R's. Rhetoric is the art of influence, friendship, and eloquence, of ready wit and irrefutable logic. And it harnesses the most powerful of social forces, argument. Whether you sense it or not, argument surrounds you. It plays with your emotions, changes your attitude, talks you into a decision, and goads you to buy things. Argument lies behind political labeling, advertising, jargon, voices, gestures, and guilt trips; it forms a real-life Matrix, the supreme software that drives our social lives. And rhetoric serves as argument's decoder. By teaching the tricks we use to persuade one another, the art of persuasion reveals the Matrix in all its manipulative glory. The ancients considered rhetoric the essential skill of leadership--knowledge so important that they placed it at the center of higher education. It taught them how to speak and write persuasively, produce something to say on every occasion, and make people like them when they spoke. After the ancient Greeks invented it, rhetoric helped create the world's first democracies. It trained Roman orators like Julius Caesar and Marcus Tullius Cicero and gave the Bible its finest language. It even inspired William Shakespeare. Every one of America's founders studied rhetoric, and they used its principles in writing the Constitution. Rhetoric faded in academia during the 1800s, when social scientists dismissed the notion that an individual could stand up to the inexorable forces of history. Who wants to teach leadership when academia doesn't believe in leaders? At the same time, English lit replaced the classics, and ancient thought fell out of vogue. Nonetheless, a few remarkable people continued to study the art. Daniel Webster picked up rhetoric at Dartmouth by joining a debating society, the United Fraternity, which had an impressive classical library and held weekly debates. Years later, the club changed its name to Alpha Delta and partied its way to immortalHeinrichs, Jay is the author of 'Thank You for Arguing What Aristotle, Lincoln, And Homer Simpson Can Teach Us About the Art of Persuasion', published 2007 under ISBN 9780307341440 and ISBN 0307341445.