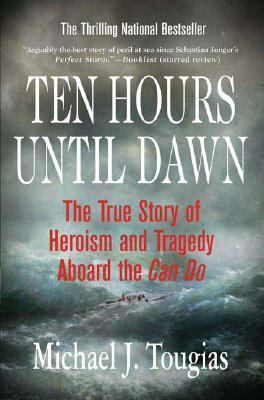 Chapter One The Gathering Storm Frank Quirk, Jr., often spent the night aboard the Can Do, and on the morning of February 6, 1978, he awoke on his vessel wondering when it would snow. The prior evening's weather forecast called for snowfall to begin in the early-morning hours, yet there wasn't a flake in the sky, just low leaden clouds and a bitter cold breeze. He could have caught a little more sleep, because no piloting jobs were scheduled, but that wasn't his nature. The forty-nine-year-old former navy Seabee (construction battalion), with a wife and three children, was disciplined and full of energy. Although Frank's crew-cut style hair was mostly gray, he kept in tip-top shape and was quite strong, with a stocky build. He was well liked, with an easygoing manner and a ready smile. Frank had been plying these waters for over twenty years and had a healthy respect for the sea, but he also knew the location of most every peril and felt comfortable navigating his boat in all kinds of weather, even on the darkest nights. He considered himself quite fortunate: his work allowed him to be his own boss and, instead of being trapped in an office, he could be on the ocean nearly every day. Frank loved the sea, both the freedom it affords as well as its challenges and ever-changing nature. He felt the same about the Can Do, which he had dubbed with the Seabees' motto. Among Gloucester's fishing and boating community Frank was well known. He had received two Mariner's Medals for heroism at sea and countless times aided boaters in distress. Sometimes he just brought fuel to a skipper who had run out of gas, or dived overboard to retrieve a pair of eyeglasses dropped by a careless boater. One recreational boater recalls radioing for assistance when the engine on his runabout conked out on a beautiful Saturday afternoon. Frank was relaxing on the Can Do, several miles away. When no boaters close to the runabout came on the radio, Quirk went on the air, offering a tow from Gloucester to the boat's home port in Marblehead, several miles away. The tow and return trip consumed six or seven hours of Quirk's day off, but he refused to accept any payment. He usually just said, "It was nothing at all," or if the boat had fishermen aboard, "Just throw me a fish next time you see me." His kids said Frank brought home a lot of fish and lobsters. On that Monday morning, Quirk was listening to the marine radio in the Can Do's wheelhouse. Surrounded by small rectangular glass windows, he had a good view of Gloucester's inner harbor, where all manner of boats were docked, from battered and rusting fishing trawlers to sleek modern pleasure yachts. The National Weather Service was announcing an updated weather forecast, saying the snow was still coming and would be accompanied by high winds. Meteorologists explained that the snowfall could be significant and some even used the term blizzard, but few gave any inkling that New Englanders were about to be pounded by a blizzard of incredible proportions. New England's "storm of the century" was on the way, heading directly up the eastern seaboard toward Massachusetts. The storm was a deceptive one at this early stage. It was located off the Maryland coast, and during the morning hours the mid-Atlantic states as well as New Jersey and New York were receiving significant snowfall accompanied by strong winds. This region, however, was absorbing just a glancing blow compared to what was in store for Massachusetts and Rhode Island, because with each passing hour the storm intensified. The storm was strengthening so rapidly, meteorologists later would refer to it as a "bombo-genesis" or simply a bomb. As it moved nortTougias, Michael is the author of 'Ten Hours Until Dawn The True Story of Heroism And Tragedy Aboard the Can Do', published 2006 under ISBN 9780312334369 and ISBN 0312334362.