Tempt Me with Darkness 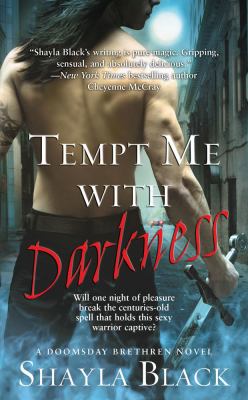 CHAPTER ONE PRESENT DAY ENGLAND Beside the lush banks of a pond, a woman beckoned, familiar. Yet Marrok of Cadbury had never seen her face in his life. Vivid grass and multicolored flowers rioted around her. A cityscape towered in the background. None of that held his gaze rapt. Her bare-to-the-skin nakedness and dangerous beauty did. The woman's sable hair swept over one pale shoulder, curling under the swell of a generous breast topped by a berry nipple -- and framing a birthmark he knew well. She no longer possessed the platinum tresses into which he'd once thrust his hands. Her new face was delicate -- higher cheekbones, pert nose, pillowy mouth -- but the siren could not disguise herself from him. Black lashes fluttered over violet eyes that had long haunted his nightmares. Morganna. Lust crashed into him, a battering ram to the gut. Need stiffened his cock. He wanted her as he never had, with a frightening desperation. Bollocks! Was he daft enough to let her lure him to further doom? Acid hatred mixed with clawing desire. He tried to look away, but his gaze caressed her small waist, her curved hips, the moist flesh between her thighs glistening. Luminous, her smile coaxed him to touch her, challenged him to walk away. Marrok didn't -- couldn't -- do either. Morganna bewitched him more now than she had on their wind-drenched night of shared pleasure an eon ago. The strawberry mark low between her breasts brought back memories of pale moonlight surrounding them as he'd succumbed to temptation and tupped her senseless. For that mistake, he'd paid dearly. With the last fifteen centuries. Mist swirled around her like the mystical fog of legend, as if caressing her. Though she was deadly, Morganna in this new form captivated him. Today, society had clinical terms for his obsession. He cared not. Getting the treacherous bitch to release him from his hell...nothing else mattered. With an alluring curl of her fingers, she summoned him. Marrok gritted his teeth. To yield would only mean further torture. But his body betrayed him, inching closer, his cock swelling painfully. Cursing, he closed his eyes. If he must resist her to be free, he feared he was doomed. Marrok opened his eyes as a fresh rush of desire slammed him. Want was a luxury; this woman he needed. The feeling was as new as a baby's first breath...and as welcome as the plague. And likely illusory, merely one of Morganna's tricks. Though he dug his fingers into his thighs, her haunting eyes pleaded with him. Marrok very nearly surrendered to the urge to touch her. Then she waved her hand. Suddenly, she clutched to her naked breasts the ornate red book he knew meant the difference between his life and death, and she backed away. Nay! Marrok launched himself at her. They fell to the ground in a tangle of breaths, arms, and legs. The book fell beside them, its maddening lock still firmly closed. Before he could grab it, she latched slender arms around his neck and arched, distracting him with her lush curves. "Marrok, love me." Her plea spiked his fevered lust. He ached to sink deep into her. But he had to resist this fatal woman. Somehow. "Release me," he growled. She clung tighter, then writhed against his erection. By God, she was wet. He was on fire for her. A heartbeat from explosion. A mere moment from forgetting how treacherous she was. "Open the book!" "You want me." Her whisper made him shiver. Why deny that? A waste of time and breath. As she wriggled under him, lightning chased across his skin. Like a fool, he thrust against her and groaned. The need to utterly possess her screamed through him. Later, he'd remember all the reasons he could not. Marrok dropped his hands to her thighs and pried them wider. "If you tempt me thus, you will take what I give you. All I give you." "Anything." Morganna's nipples burned his chest as he lifted her legs over his arms. From one insBlack, Shayla is the author of 'Tempt Me with Darkness' with ISBN 9781416558583 and ISBN 1416558586.