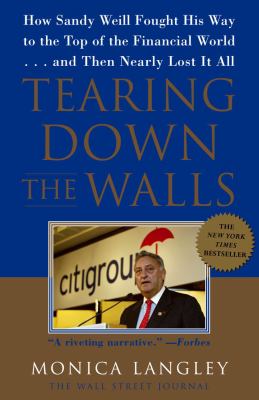 Chapter 1: Crashing the Gates At age twenty-two, when most young men are eagerly laying plans for their careers, Sandy Weill was facing failure. In one shattering night the future that he had thought would be his had utterly evaporated. His dreams of joining the family business were in ruins, his beloved mother was suddenly facing life alone, his classmates would soon be graduating without him, and the woman he desperately wanted to marry was being told to dump him. All because his father, Max Weill, went out for cigarettes one night and didn't come back.For Sandy, the pain of failure was all the worse for how hard and long he had struggled to achieve even a smattering of success. As a child growing up in the Bensonhurst section of Brooklyn, short and chubby Sandy was an easy target for the bullies who often sent him scurrying to his mother's protective skirts. Shy and reclusive, he made no close friends at school and stood in fear and awe of his handsome, ebullient father, Max, who often scolded Sandy for not being more rough and tumble and not standing up for himself. His only real friend was his little sister, Helen, who worshiped her brother. During summers at their grandparents' farm, Sandy would dig worms so that he and Helen could fish in the pond and then dutifully bait her hook and remove any wriggling fish she caught. But even with her, Sandy kept his feelings to himself. The two could sit together for hours listening to New York Yankees games on the radio without exchanging a word.All that began to change when fourteen-year-old Sandy was enrolled at the Peekskill Military Academy, a boarding school near his grandparents' farm. The school emphasized both sports and scholarship and kept students' days full of activities. At five feet nine inches Sandy was too small for the football team, but much to his own surprise, he honed his tennis skills, acquired during earlier summer camps, to win many school tournaments. He became captain of Peekskill's tennis team and even played in the Junior Davis Cup. The physical regimen of calisthenics every morning and sports every afternoon melted away some of the baby fat. At the same time Sandy realized he liked learning and was good at it. He would bang out his homework assignments in an hour or two and then nag his roommate, Stuart Fendler, to finish his assignments so the two could head for the school canteen for ice cream. Yet while excelling at both sports and academics, Sandy never became a leader on campus or even a very popular student. At graduation, when seniors predicted what would become of their classmates, no one predicted Sandy would do anything exceptional. He told classmates he planned to join his father's steel-importing business. In a school skit, Sandy even cast himself as the owner of Super Deluxe Steel Plating Co., with five plants across the country.Max Weill's inaptly named American Steel Co. -- it dealt almost exclusively in imported steel -- was his second business venture. Like many young Jewish men whose parents had emigrated from Eastern Europe, Max first went into the rag trade, where his good looks, flirtatious ways, and free spending won him a strong clientele as a dressmaker. Etta Kalika, whom Max married in 1932, couldn't have been more different. Plain, conservative, and thrifty, Etta refused to wear the fancy clothes Max brought her and preferred to spend her time visiting her parents, who lived downstairs from Max and Etta in a three-family home the parents owned, and caring for her two children, Sandy and Helen. While the dressmaking business was successful, Max Weill, who treated himself to a weekly haircut and manicure, was always on the lookout for the next big opportunity. One opportunity he found -- to violate wartime price-gouging regulations -- earned him a $10,000 fine and a suspended prison sentence and prompted him to leave dressmaking for good. After an abortive move to Miami during the warLangley, Monica is the author of 'Tearing Down the Walls How Sandy Weill Fought His Way to the Top of the Financial World--And Then Nearly Lost It All', published 2004 under ISBN 9780743247269 and ISBN 0743247264.