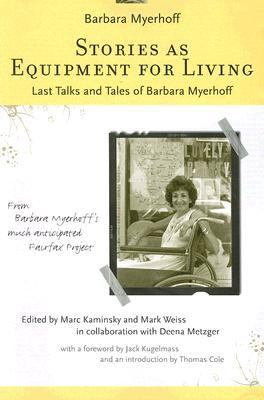 Barbara Myerhoff's groundbreaking work in reflexivity and narrative ethnography broke with tradition by focusing not on the raw ethnographic data, but on her interaction with those she studied. Myerhoff's unfinished projects, including her final talks on storytelling, ritual, and the "culture of aging and Yiddishkeit," offer a magisterial summary of her life's work."The beauty ofStories as Equipment for Livingis the quality of being a compilation of rescued fragments, bits and pieces of a great master's writing and thinking that were coming towards synthesis but had never reached a finished form prior to her death. This collection is an examination of the place of narrative in human life, the synthetic nature of culture and the constant search for visibility particularly by those relegated for one reason or another to the margins. A thought-provoking book worthy of extended reflection." ---Jack Kugelmass, Professor of Anthropology and Director of Jewish Studies, University of Florida"Stories as Equipment for Livingachieves a nice balance between preserving Myerhoff's work in its original form and reconstructed contexts, but presenting it in a manner relevant to readers a generation after her death. The book documents Myerhoff's growing involvement with Jewish culture, the actual process of anthropological work through field notes, and the picture of how she always was bouncing the fine details of this combined professional and personal venture off the 'big questions' of anthropology in its broadest sense." ---Harvey E. Goldberg, Professor of Sociology and Anthropology, Hebrew University, Israel"These essays capture the rhythm of Barbara Myerhoff's words and her vivid and distinctive train of thought, bringing the reader into the classroom of one of anthropology's finest lecturers. As an anthropologist with a poet's gift for language, she utilizes the tools of ethnography and extraordinary powers of observation---a remarkable 'ethnographic eye'---to explore the outward expressions and inner lives of the Fairfax neighborhood of L.A. These stories are not only glorious introductions to the study of culture, but provide in their revelations a reason for studying it. They are required reading for anyone passionate to know what an anthropologist can teach us about communities and ultimately about ourselves." ---Steve Zeitlin, Director, City Lore: The New York Center for Urban Folk Culture"Master of the third voice, the voice of collaboration, Myerhoff is at once a consummate listener and inspired storyteller. This book offers a rare and luminous opening into the working process and wisdom of one of the great anthropologists of the twentieth century." ---Barbara Kirshenblatt-Gimblett, Professor of Performance Studies at New York University and coauthor ofThey Called Me Mayer July: Painted Memories of a Jewish Childhood in Poland Before the Holocaust"Myerhoff and her collaborators have given her 'Hasidim,' her disciples old and new, a final and precious gift." ---Jonathan Boyarin, The Robert M. Beren Distinguished Professor of Modern Jewish Studies at the University of Kansas and author ofThinking in JewishBarbara Myerhoff was a renowned anthropologist who did pioneering work in gerontology, Jewish studies, folklore, and narrative anthropology. She is best known for her ethnography of and personal involvement with a community of elderly immigrant Jews in California. Her writings and lectures have had an enormous impact on all of these areas of study, and her books are widely celebrated, especiallyNumber Our Days, whose companion documentary film won an Academy Award.Marc Kaminsky is a psychotherapist, a poet, a writer, and the former codirector of the Institute on Humanities, Arts and Aging of the Brookdale Center on Aging.Mark Weiss is a writer, an editor, a translator, and a poet; his books include the widely praiseKaminsky, Marc is the author of 'Stories As Equipment for Living Last Talks And Tales of Barbara Myerhoff', published 2007 under ISBN 9780472069705 and ISBN 0472069705.