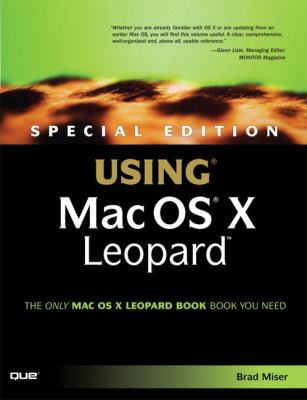 SPECIAL EDITION USING MAC OS X LEOPARD THE ONLY MAC OS X LEOPARD BOOK YOU NEED We crafted this book to grow with you, providing the reference material you need as you move toward software proficiency and use of more advanced features. If you buy only one book on Mac OS X Leopard, Special Edition Using Mac OS X Leopard is the only book you need. Explore the depths of Mac OS X s core including the desktop, Finder, Finder windows, the Dock, user accounts, the Dashboard and widgets, Spaces, and much more. Master OS X by installing and using Mac OS X applications, customizing the system, making your Mac accessible to everyone, automating your Mac with the Automator, using Unix commands, and working with mobile Macs. Run Windows applications on your Mac for those rare occasions when a Mac application isn t available. Exploit Mac OS X s Internet tools to connect to the Net with or without wires, use email, surf the Web, and take advantage of the many features of .Mac. Explore some of the great applications included with Mac OS X, such as iTunes, QuickTime, DVD Player, iCal, Address Book, iChat, and on it goes. Expand your system with input devices (such as keyboards and trackballs), output devices (printers, displays, and such), hard drives, and hubs (Ethernet, USB, and FireWire). Connect to other computers and devices safely and easily using Mac OS X s advanced networking tools. Learn to configure your own network including Macs and Windows computers and how to share an Internet connection among them. Use great Mac OS X tools and techniques to keep your system in top condition and to solve problems. Whether you are already familiar with OS X or are updating from an earlier Mac OS, you will find this volume useful. A clear, comprehensive, well-organized and, above all, usable reference. Glenn Lisle, Managing Editor, MONITOR Magazine A must-read for anyone using Mac OS X for the first time and for those upgrading to the latest version of the Mac operating system. Brad Miser covers all the important topics in an interesting, easy-to-understand manner that's aided and abetted by well chosen graphics, useful tips and explanatory notes. Leopard s a great OS and Brad s book is a great guide for it. Dennis Sellers, Publisher, Macsimum News Brad Miser has written extensively about all things Macintosh. In addition to Special Edition Using Mac OS X Leopard, Brad has written many other books, including My iPhone; Sleeping with the Enemy: Running Windows on a Mac (digital Short Cut); Special Edition Using Mac OS X, v10.4 Tiger; Absolute Beginner's Guide to iPod and iTunes; Absolute Beginner's Guide to Homeschooling; Mac OS X and iLife: Using iTunes, iPhoto, iMovie, and iDVD; iDVD 3 Fast & Easy; Special Edition Using Mac OS X v10.2; and Using Mac OS 8.5. He has also been an author, development editor, or technical editor on more than 50 other titles. He has written numerous articles for MacAddict magazine and has been a featured speaker at Macworld Expo, user group meetings, and other venues. Brad holds a Bachelor of Science degree in mechanical engineering from California Polytechnic State University at San Luis Obispo and has received advanced education in maintainability engineering, business, and other topics.Miser, Brad is the author of 'Special Edition Using Title 125' with ISBN 9780789736536 and ISBN 0789736535.