Skin Deep Tattoos, the Disappearing West, Very Bad Men, and My Deep Love for Them All 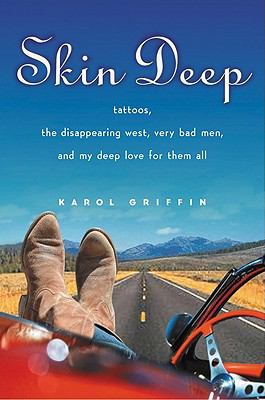 Chapter One WYOMING AND TATTOOING were "discovered" by white people at roughly the same time. Two thousand years ago, Wyoming was a place nomadic people traveled to when they needed bison for food or quartzite to make sharp things. The people who came here took what they needed and traveled on or went back to wherever they came from. Alkali ponds and fish fossils were the only souvenirs of Wyoming's prehistory, the epochs and eras during which most of the state had been covered by a saltwater lake that gradually dried up like affection soured. Two thousand years ago, permanent body alteration, usually in the form of tattooing or scarification, was common in non-Western cultures, often done as a rite of passage from childhood to adulthood. Tattoos signified a person's character and status within a society. The process was painful and time-consuming, but attention spans were considerably longer then, distractions were markedly fewer. A tattoo could be made with anything sharp enough to break the skin-metal, if you had it, sharpened rock or serrated shell and bone if you didn't-and soot was usually the main ingredient in any pigment. In 1769, Captain James Cook, an English explorer, brought home tales of the practice of "ta-tu" in Tahiti, and his stories were illustrated by some of the members of his crew who had gotten tattoos as souvenirs of their journey. To make this Tahitian mark, a narrow piece of wood inlaid with a series of fish bones was dipped into pigment, placed against the skin, and tapped with a rod held in the tattooist's other hand. On his second voyage to Tahiti, Captain Cook brought back a tattooed man called Omai, who evolved from tribal royalty to sideshow freak as he stepped ashore. Eventually, European sailors attached magical powers to tattooing; a pig tattoo on the top of one foot and a chicken tattoo on the top of the other were thought to be a charm against drowning. Instead of fish bones, needles bound to a piece of metal or wood were used to make the mark. In America, Wyoming still wasn't a popular place, mostly because of its inhospitable climate and the distances between watering places. Bison fared better a few hundred miles to the east, and intertribal wars kept the human population down. There were fewer than ten thousand nomadic Native Americans inhabiting Wyoming when the white people showed up. The United States has a history of losing its innocence and then forgetting all about what happened. The West wasn't America's only frontier; it wasn't even America's first. By the time Americans got around to the West, most of a continent had been purchased or conquered in a collie-wobble cadence of falling wilderness and rising settlements. In the early 1800s, explorers returned from the wilderness west of the Mississippi River with dreamy stories of landscapes unlike anything anyone had ever seen; the West was a real-life Garden of Eden, full of promise and sublime in the antiquated sense of the word. The West was America's first last frontier. There was a market for this. The West was packaged like a presidential candidate and airbrushed into porn-star perfection. Its virtues were writ larger than life, and everything else was embellished, forgotten, or reinvented until the West became synonymous with easy money and self-fulfillment. It came complete with celebrity endorsements and the limited warranty of the Homestead Act. As frontiers went, this was new! And improved! And advertised around the world. Surveyors traversed the Continental Divide in 1855, mapping out the path of the railroad tracks that would connect both coasts. The government gave the railroad twelve million acres along the route, compensation for laying the tracks that would undoubtedly lead to the fulfillment of Manifest Destiny-the decree, supposedly straight from God, that the United States had not only a right but a duty to expand across the continent. This expansioGriffin, Karol is the author of 'Skin Deep Tattoos, the Disappearing West, Very Bad Men, and My Deep Love for Them All' with ISBN 9780151008841 and ISBN 0151008841.

2 from $9.93
Loading marketplace prices 2 copies from $9.93 How does the rental process work?
View more