Singing Whales and Flying Squid The Discovery of Marine Life 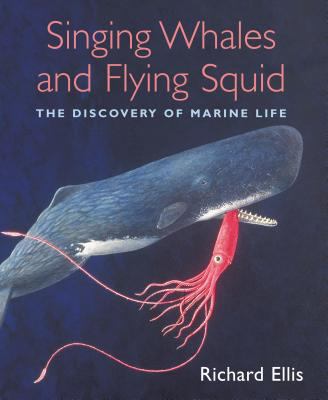 Two-thirds of this planet is covered by water inhabited by an incredible variety of living organisms, ranging in size from microbe to whale, and in abundance from scarce to uncountable. Whales and dolphins must surface to breathe, and some fishes occupy surface waters and can easily be seen from boats or shore, but most of the marine bio-profusion is hidden from human eyes, often under thousands of feet and millions of tons of water, which is usually cold, dark, and utterly inhospitable to humans. By definition, the study of marine life has been quantitatively and qualitatively different from the study of terrestrial life--it is, if you will, a different kettle of fish. What do we know today, how have we learned it, and what remains unknown and unknowable about inner space? Because there have been so few human visitors to the uninviting world of the deep sea, scientists have had to rely on trawled specimens, photographs taken by robotic cameras, or occasionally, observations from deep-diving submersibles, to get even the vaguest idea of the nature of life in the abyss. So far, even our most elaborate efforts to penetrate the blackness have produced only minimal results. It is as if someone lowered a collecting basket from a balloon high above the tropical rain forest floor, and tried to analyze the nature of life in the jungle from a couple of random hauls. The inner space of the deep offers the last frontier on the planet. Even now, we know more about the back side of the moon than we do about the bottom of the ocean, but then the surface of the moon is not hidden under miles of impenetrable water. But we do know that living in this inaccessible medium are some of the mostfascinating creatures on Earth. An understanding of the interrelationships between various creatures-including the one predator that has the power to distort, damage, or even eliminate populations of marine animals-is necessary if we are to survive in harmony with these populations. Although new technologies have given us tools to better census the whales, dolphins, and fishes, and to see heretofore unexpected life and geological forms deep under the sea, we are a long way from comprehending the nature and importance of marine biodiversity. Singing Whales, Flying Squid, and Swimming Cucumbers is an attempt to put the search for knowledge into perspective-to try to find out how we got here, and where, with the help of curiosity, science, and technology, we might be headed. With this as our Baedeker, we will voyage through time and space, tracing the history of the discovery of marine biology, from the moment that the first scientists--although for the most part, "science" had barely been invented--tried to figure out what sorts of creatures lived in the Mediterranean, the sea right off their shores. So join Richard Ellis on an underwater adventure like no other you've ever taken or heard of: a voyage to discover the mysteries and reveal the wonders of marine life--more unusual and more astonishing than you--or anyone else--ever imagined.Ellis, Richard is the author of 'Singing Whales and Flying Squid The Discovery of Marine Life', published 2006 under ISBN 9781592288427 and ISBN 1592288421.