Shakespeare by Another Name The Life of Edward De Vere, Earl of Oxford, the Man Who Was Shakespeare 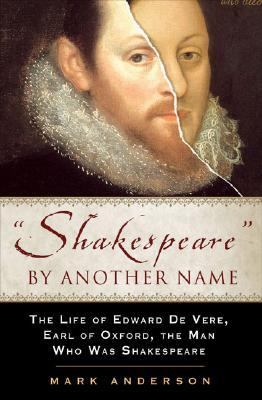 Introduction iA human being is the best plot there is.i oJohn Galsworthy Every authoris life tells a story. According to the conventional biography, William Shakespeare was born in Stratford-upon-Avon in 1564; he moved to London sometime in the late 1580s or early 1590s and soon enjoyed great success as an actor and playwright, authoring some 37 or more plays, 2 epic poems, 154 sonnets, and assorted other verse that have become the crowning works of the English language. He retired to his hometown sometime around 1612, and he died in 1616. Seven years after his death, the first edition of his collected plays appeared in print. Although no authenticated portrait from his lifetime exists, the 1623 folio of Shakespeareis works features the above image on its opening page. Yet this image and this conventional story have confounded many great minds over the years. The novelist Henry James remarked in a 1903 letter to a friend that he was ihaunted by the conviction that the divine William is the biggest and most successful fraud ever practiced on a patient world.i In Sigmund Freudis 1927 essay iAn Autobiographical Study,i the founding father of modern psychology stated, iI no longer believe that William Shakespeare the actor from Stratford was the author of the works that have been ascribed to him.i Mark Twain published an entire book in 1909oIs Shakespeare Dead'othat tore the conventional Shakespeare biography to tatters. Walt Whitman told a confidant in 1888: iIt is my final belief that the Shakespearean plays were written by another hand than Shaksperis [sic]. . . . I do not seem to have any patience with the Shaksper argument: it is all gone for meoup the spout. The Shaksper case is about closed.i Doubts about the Shakespeare story emerged less than a century after the first conventional biography appeared. In 1709 the dramatist Nicholas Rowe first sketched out iSome Account of the Life, &c. of Mr. William Shakespear [sic].i In 1747, the antiquarian Joseph Greene came across a copy of Shakespeareis will and was singularly unimpressed, calling the document iso absolutely void of the least particle of that spirit which animated our great poet.i In 1767, the theatrical impresario David Garrick launched the Shakespeare industry in Stratford-upon-Avon with a three-day jubilee that transformed the backwater Warwickshire town into the literary tourist mecca that Stratford has remained to this day. During the same year, Garrickis friend, the physician Herbert Lawrence, wrote an allegory, The Life and Adventures of Common Sense, accusing iShakespeari of stealing other peopleis works. In 1786, the American statesman John Adams, upon visiting Stratford, echoed a growing skepticism of the validity of the Shakespeare story. iThere is nothing preserved of this great genius which is worth knowing,i Adams recorded in his personal travelogue. iNothing which might inform us what education, what company, what accident, turned his mind to letters and the drama.i Early in the next century, the novelist Washington Irving continued the thread of doubt with his own semiautobiographical account of a visit to Stratford. iThe long interval during which Shakespeareis writings lay in comparative neglect has spread its shadow over his history,i Irving wrote in his 1820 Sketch Book of Geoffrey Crayon, Gent. iAnd it is his good or evil lot that scarcely anything remains to his biographers but a scanty handful of conjectures.i Throughout the nineteenth and early twentieth centuries, Walt Whitman, Mark Twain, and Henry James had joined a chorus of doubters who all expressed the same grave reservation: The conventional biography of Shakespeare is simply wrong; the ghost of another man haunts the canon. In 1920, this ghost materialized in a revolutionary work of investigative scholarship by the British educator J. Thomas Looney. Looneyis iShakespearei Identified in Edward de Vere, seveAnderson, Mark is the author of 'Shakespeare by Another Name The Life of Edward De Vere, Earl of Oxford, the Man Who Was Shakespeare', published 2005 under ISBN 9781592401031 and ISBN 1592401031.