Sammy Keyes and the Art of Deception 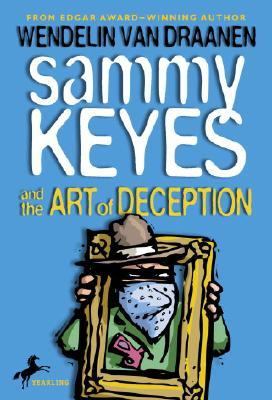 One March is windy in Santa Martina. And my theory is, it does something wicked to the air. Maybe it whooshes up devil dust and pixie pollen, I don't know. What I do know is, if you're a quiet, in-your-seat-when-you're-supposed-to-be kind of person in February, by the middle of March you'll be antsy. Hyper. Like all you want is to get outside and tear it up in nature's big gust bowl. Which I guess is why I wasn't completely flattened when Marissa charged me out of nowhere between classes, practically swung around my neck, and cried, "Guess what!" It's the kind of thing you learn to expect in the middle of March. So I just hitched my backpack back on my shoulder and said, "What?" "Danny wants to meet me at the Faire!" she says, whirling around with her arms spread wide. "The Renaissance Faire?" I ask her, because Ms. Pilson's been talking it up all week in English class, saying it'll "tune our tympanic membranes" for some play her Drama Club is putting on next week. Hop-hop, hippity-hop Marissa goes, like a manic March hare. "Yeah! Can you believe it? Can you even believe it?" Well, no, I couldn't. Danny's one of those cool dudes, you know? The kind who walks cool and talks cool and even puts his jacket on cool. And since Marissa's a sucker for guys who put their jackets on cool, well, she's been sizzling for Danny Urbanski since elementary school. But since he's an eighth grader and we're only in seventh, I just figured it would never happen. Even if he did like Marissa. It would be too, you know, uncool to go out with a seventh grader. I guess my eyebrows were stretched up pretty good, because Marissa giggles like you wouldn't believe, then runs off, saying, "Maybe Casey will ask you!" I yell after her, "Shut up! He's Psycho-Heather's brother, remember?" She just laughs over her shoulder and waves, and that's when I realize I'd yelled really loud. I mean, kids all around are looking at me, and I can tell--like lightning to a rod, this is going to find its way back to Heather. I hurried off to class thinking, when, when am I ever going to learn to watch what I say? Especially at school, where gossip is king, and Heather Acosta is queen. At least that's what she's angling for. Right now she's more like the evil step-princess or something, wearing her crown jewels all up and down her earlobes. But there's no doubt about it--that girl wants to reign supreme. Anyhow, I blasted over to art class, and the minute I blew through the door, I could tell that our teacher Miss Kuzkowski had been outside, mixing it up with nature. Now, Miss Kuzkowski is not real tidy looking to begin with. I think her hands are permanently stained with paint--especially her cuticles and under her nails. And even though she wears a smock and a beret when she's showing off, mixing up colors on her fancy wooden palette, she still manages to get paint in her hair and on her clothes, too. But today she looked even messier than usual. Her hair was ratted around everywhere and falling over one eye--it was wild! She was all out of breath, too, rosy-cheeked and smiling. "Hi, guys!" she says when the tardy bell rings. "Glorious day, isn't it?" Everyone peels off their backpacks and sort of eyes each other. She notices some green paint on the heel of her hand and starts rubbing it away as she says, "Guys, I've been thinking . . ." Half the class groans, because we know that when Miss Kuzkowski thinks, the rest of us suffer. "Hang on! You're going to like what I have to say." She gives up on the paint and straightens her posture. Her hair, though, is still totally shock-waved. "I do think our section on art history was a good idea, only I've decided you're bored by it because you're not experiencing it. YouVan Draanen, Wendelin is the author of 'Sammy Keyes and the Art of Deception', published 2005 under ISBN 9780440419921 and ISBN 0440419921.