Sailing Alone Around the World 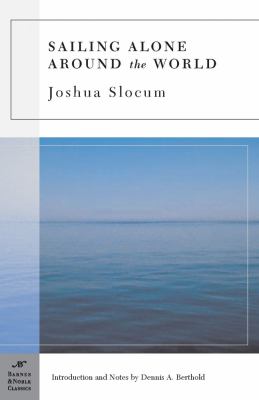 From Dennis A. Berthold's Introduction toSailing Alone Around the World There is nothing in sea literature likeSailing Alone Around the World, nor can there ever be again. Only one man was the first to sail around the world alone, and only one book recounts that astonishing voyage in his own words. This is that book. When Joshua Slocum left Boston on April 24, 1895, to sail around the world alone in theSpray, a 37-foot sloop he reconstructed himself, Mabel Wagnalls wrote in his log, "The Spray will come back" (Teller,Joshua Slocum, p. 77; see "For Further Reading"). Those words proved prophetic in more ways than one. Of course theSpraydid come back three years later, anchoring on June 27, 1898, in Newport, Rhode Island. No one had ever circumnavigated the globe alone until Slocum did it, and not many have done so since. TheSprayhas also returned in the hundreds of full-sized replicas Slocum fans have built over the last century, many of them amazingly precise. Two books, Kenneth Slack'sIn the Wake of the Spray(1966) and R. Bruce Roberts-Goodson'sSpray: The Ultimate Cruising Boat(1995), have documented this phenomenon, which began in 1903 and continues to the present. Between 1969 and 1995, Roberts-Goodson sold more than 5,000 sets of plans forSprayreplicas of various sizes, and more than 800 of these have actually been built (Roberts-Goodson, p. viii). Hundreds of additional pleasure craft have been based on theSpray's general lines and rig, and there are probably several thousand more inspired, to one degree or another, by Slocum's modest sloop. Less ambitious Slocum fans can find kits in any good hobby store and build their own model at home. Right now, somewhere on the world's oceans, someone is sailing a version of theSprayand keeping alive the remarkable story of a little boat that sailed around the world with only one crew member, the dauntless Yankee skipper Joshua Slocum. As important as are the material reincarnations of theSpray, her voyage would be far less memorable if she had not also returned as a literary artifact, the inspiration and heroine, if you will, of one of the greatest sea narratives ever written. Like theSpray,Sailing Alone Around the Worldis Slocum's original creation, and it has enjoyed a long life in many editions, reprintings, and retellings. It first appeared in serial form inCentury Illustrated Monthly Magazine, a popular periodical published in New York. As soon as the magazine series ended, Slocum's tale was produced in book form, complete with theCenturyillustrations by Thomas Fogarty and George Varian. It sold 7,000 copies in its first year, and its original edition eventually sold more than 27,000 copies (Teller,pp. 179, 176). Since 1956 it has been widely available in paperback editions, including a dozen or so for young readers. Excerpts are frequently included in anthologies of nautical writing. It has been translated into Swedish, Polish, French, German, Dutch, Spanish, Czech, and in 2003 and 2004, Japanese and Chinese. There is probably no time during its history that it has been out of print, an honor it shares with such American classics as Harriet Beecher Stowe'sUncle Tom's Cabin(1852) and Mark Twain'sAdventures of Huckleberry Finn(1884). Portions of the book are frequently anthologized, and its durability has kept Slocum's other extended sea narrative,Voyage of the Liberdade(1890), before the public as well. Slocum has his own author society, an active group of sailors, shipbuilders, and lovers of nauticaSlocum, Joshua is the author of 'Sailing Alone Around the World ', published 2005 under ISBN 9781593083038 and ISBN 1593083033.