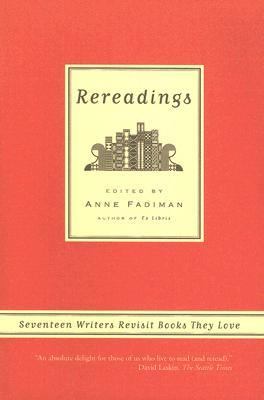 Excerpted from Rereadings, edited by Anne Fadiman. Foreword and editorial work copyright 2005 by Anne Fadiman. Published in September 2005 by Farrar, Straus and Giroux, LLC. All rights reserved. Foreword: On Rereading When my son was eight, I read C. S. Lewis's The Horse and His Boy aloud to him. I had originally read it when I was eight myself, and although I'd reread the better-known Narnia booksThe Lion, the Witch and the Wardrobe; the Magician's Nephew, The Silver Chairin the interim, more than forty years had passed since I'd read The Horse and His Boy. Reading a favorite book to your child is one of the most pleasurable forms of rereading, provided the child's enthusiasm is equal to yours and thus gratifyingly validates your literary taste, your parental competence, and your own former self. Henry loved The Horse and His Boy, the tale of two children and two talking horses who gallop across an obstacle-fraught desert in hopes of averting the downfall of an imperiled kingdom that lies to the north. It's the most suspenseful of the Narnia books, and Henry, who was at that poignant age when parents are still welcome at bedtime but can glimpse their banishment on the horizon, begged me each night not to turn out the light just yet: how about another page, and then how about another paragraph, and then, come on, how about just one more sentence? There was only one problem with this idyllic picture. As I read the book to Henry, I was thinking to myself that C. S. Lewis, not to put too fine a point on it, was a racist and sexist pig. I'd read two biographies of Lewis and knew that his relations with women, colored by the death of his mother when he was nine, were pretty peculiar. I'd read "The Shoddy Lands," a creepy misogynist fantasy in which the (male) narrator encounters a giantess whose nude body makes him gag. However, I remembered The Horse and His Boy only as a rollicking equestrian adventure, sort of like Misty of Chincoteague but with swordfights instead of Pony Penning Day. My jaw dropped when I realized that Aravis, its heroine, is acceptable to Lewis because she acts like a boyshe's interested in "bows and arrows and horses and dogs and swimming"and even dresses like one, whereas the book's only girly girl, a devotee of "clothes and parties and gossip," is an object of contempt. Even more appalling was Lewis's treatment of the Calormenes, a brown-skinned people who wear turbans and carry scimitars. (Forty years ago, the crude near-homonym had slipped by me. This time around, I wondered briefly if Lewis was thinking only about climatecalor is Latin for "heat"but decided that was unlikely. It's as if he'd named a Chinese character Mr. Yellow: it had to be on purpose.) The book's hero, Shasta, is the ward of a venial Calormene fisherman, but, as a visitor observes, "this boy is manifestly no son of yours, for your cheek is as dark as mine but the boy is fair and white." That's how we know he belongs to a noble northern race instead of an uncouth southern one. Of the Calormene capitalthe seat of a fat, obnoxious, vulgarly bejeweled potentate called the TisrocLewis remarks that "what you would chiefly have noticed if you had been there was the smells, which came from unwashed people, unwashed dogs, scent, garlic, onions, and the piles of refuse which lay everywhere." It was difficult to read this kind of thing to Henry without comment: the words, after all, were coming to him in mFadiman, Anne is the author of 'Rereadings ', published 2006 under ISBN 9780374530549 and ISBN 0374530548.