Remembrance of Things Paris Sixty Years of Writing from Gourmet 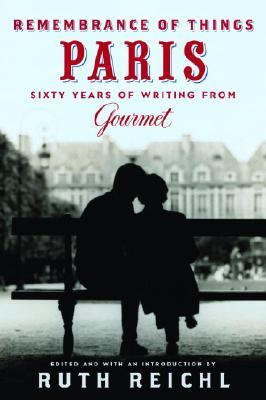 Paris in the Twenties Irene Corbally Kuhn The year was 1921. The month was May. The city was Paris. And I had just bought a new hat that I remember to this day: an exquisite, wide-brimmed straw hat trimmed with an enormous silk violet. I was about to start work as fashion editor, general reporter, and the only woman on the ten-member staff of the four-year-old Paris edition of the Chicago Tribune. The world had passed through the long darkness of the "war to end all wars" and was more than ready for the frenzied gaiety and brief brilliance of the roaring twenties. Paris was packed with Americansand, for the most part, the French were happy to have us. Artists, writers, composers, dilettantes, bankers, businessmen, army officers, diplomats, and journalists, we had little in common beyond a passion for Paris and tended to travel in separate circles that only occasionally intersected. The journalists were a most clannish group. We did not mix with the literati, which is to say the Americans who came to Paris to write novels. We were, however, most gregarious and mixed with everyone else, because a story could come from anywhere. And frequently it did. The Paris Chicago Tribune was one of the two principal English- language daily newspapers published there through the 1920s. The other was the Paris edition of the New York Herald Tribune. Although their names were similar they had little else in common. The Paris Chicago Tribune, known as "the Trib," was a grubby gamin compared with that sober, prosperous burgher, the Paris Herald Tribune, known as "the Herald," and whereas the competition between the two was friendly, it was often fierce. The Herald had been around a long time; the Trib was a brash newcomer, founded to keep the troops of the American Expeditionary Forces stationed in France during World War I in touch with news from home. The Herald had editorial offices; the Trib was put out from a single, dingy room on the upper floor of a building on the rue Lamartinean unremarkable street running off the rue Lafayette on the Right Bank. There were no desks, merely scarred, battered plank tables to support the decrepit typewriters, of which there were never enough to go around. Rickety chairs, a Telex machine, a few telephones, and a half dozen or so naked lightbulbs dangling from a painted-tin ceiling completed the decor. A few of the bulbs were covered with makeshift shades fashioned from newsprint, alarmingly charred. This inelegant space was rented from Le Petit Journal as were the presses and the services of its boisterous Montmartre compositors, who spoke a baffling patois that took months to master. More significant than any of these details, however, was the fact that the building housing the Trib's editorial room backed onto the same courtyard as a cheerful, rowdy bistro. Arrangements had long since been made for buckets of cool, foaming beer to be conveyed by means of a rope from the courtyard to the editorial room to speed the flow of copy on a hot summer's night. One unique and irreplaceable advantage that the Trib enjoyed over the Herald, though, was the editorial and reportorial talents of Floyd Gibbons, who was the European manager for the Chicago Tribune Company. Gibbons was even then legendary, the quintessential foreign correspondent, a handsome man with a huge sense of adventure, unlimited daring, and great personal courage. He had become a legend for his colorful reporting from the Mexican border war of 1916 and later embellished the legend when he sailed to England in February 1917 aboard the Cunard passenger liner Laconia. The ship was torpedoed off the Irish coast and sank almost immediately. After a night spent in a lifeboat Gibbons and the other survivors were rescued, and half an hour after landing in Liverpool Gibbons was in a telegrapReichl, Ruth is the author of 'Remembrance of Things Paris Sixty Years of Writing from Gourmet' with ISBN 9780679643098 and ISBN 0679643095.

5 from $9.58
Loading marketplace prices 5 copies from $9.58 How does the rental process work?
View more