Real All Americans The Team That Changed a Game, a People, a Nation 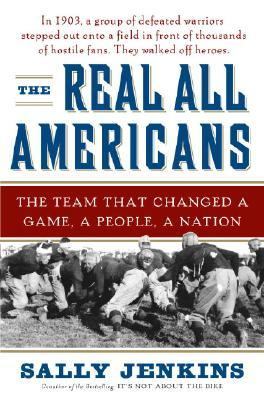 Chapter 1: The Real Field December 21, 1866, Dakota Territory The hillside on which the Sioux, Cheyenne, and Arapaho were about to make such a grisly fool of Lieutenant Colonel William J. Fetterman was duncolored and bare, with no cover save for some broken rocks that looked as if they had been thrown down by a shorttempered God. There was just one other visible thing on the expanse, the faint double track of the Bozeman Trail, heading off into the immensity that would become Wyoming. The trail sketched westward along a ridge, ragged but decipherable, its ruts worn into the ground by a succession of ironrimmed wheels bearing the weight of American ambition. Fetterman and his command of eighty men pushed over the hill and fanned out, barely holding their formation as they chased a handful of Lakota warriors mounted on ponies just ahead, baiting them. The impatient cavalrymen surged forward on their chesty Army horses. Infantrymen grabbed at their stirrups and ran along, trying to keep up. The braves drawing the soldiers on had been chosen to lead the attack for their exceptional bravery and fighting skills. One of them was Crazy Horse, not yet famous. Another was a patrician twentysixyearold OglalaLakota named American Horse, a burgeoning leader who was participating in one of the many conflicts with whites that would engage him for the rest of his life. (1) American Horse and his fellow decoys beckoned the soldiers with a variety of ruses. They galloped back and forth on ponies, screeching insults and firing occasional shots. They waved blankets at the cavalry horses, hoping to frighten them into bolting. Every now and then, one of the Indians would appear to tire. He would slow and walk his pony, seeming fatigued. This was another feint, perhaps the most tempting of all. The bluecoats hurried after them, down the Bozeman Trail. Below, hidden in hollows and gullies on either side of the trail, fully two thousand Oglala, Cheyenne, and Arapaho warriors awaited the soldiers. They crouched in long grasses, wallows, and swales, holding the lariats of their ponies. Strapped to their bodies were a variety of knives, hatchets, bows, and brilliantly painted shields. They clenched war clubs made of rough triangular rocks bound to heavy wood handles. A few of them had rifles, but mainly they carried bows and arrows, thousands of arrows. (2) The isolation and the unfamiliarity of the ground should have made Fetterman pause. The geography of the Dakota Territory alone was forbidding. It was just thatterritory, not a state or a county, but an indistinct region where the Gilded Age stopped. It was a sunburned and epic American Serengeti, a series of rolling mounds and weathertortured prairie ridges that stretched as far as the eye could see, covered by scorched haycolored grasses, only occasionally interrupted by weird rock outcroppings and misshapen trees. Out here, the world was still large and mysterious; not everything had been discovered, surveyed, charted, explained, and blueprinted. It was a magnificent setting, but an austere one, and it provoked deep apprehension in one Army wife. The country was pervaded by "an almost overpowering sense of stillness," wrote Frances Grummond, whose husband, George, was a cavalry lieutenant riding with Fetterman, "especially at night when conversation could be heard and understood at a long distance." Frances had felt a deep sense of dread since her arrival just a few months earlier. Every cloud seemed to dim the entire landscape; every crack of a rifle in the night seemed to explode right by her bed. "Every sound exacted attention." (3) The post that Fetterman and his men had ridden out from, Fort Phil Kearny, was hardly a stronghold. Rather, it was an unfinished, friJenkins, Sally is the author of 'Real All Americans The Team That Changed a Game, a People, a Nation', published 2007 under ISBN 9780385519878 and ISBN 0385519877.

8 from $1.65
Loading marketplace prices 8 copies from $1.65 How does the rental process work?
View more