Programming the Universe A Quantum Computer Scientist Takes on the Cosmos 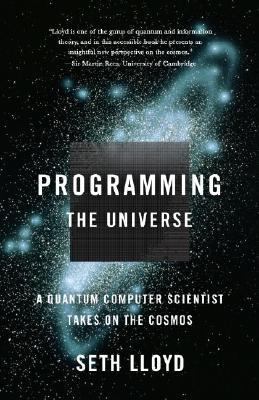 This book is the story of the universe and the bit. The universe is the biggest thing there is and the bit is the smallest possible chunk of information. The universe is made of bits. Every molecule, atom, and elementary particle registers bits of information. Every interaction between those pieces of the universe processes that information by altering those bits. That is, the universe computes, and because the universe is governed by the laws of quantum mechanics, it computes in an intrinsically quantum-mechanical fashion; its bits are quantum bits. The history of the universe is, in effect, a huge and ongoing quantum computation. The universe is a quantum computer. This begs the question: What does the universe compute? It computes itself. The universe computes its own behavior. As soon as the universe began, it began computing. At first, the patterns it produced were simple, comprising elementary particles and establishing the fundamental laws of physics. In time, as it processed more and more information, the universe spun out ever more intricate and complex patterns, including galaxies, stars, and planets. Life, language, human beings, society, culture-all owe their existence to the intrinsic ability of matter and energy to process information. The computational capability of the universe explains one of the great mysteries of nature: how complex systems such as living creatures can arise from fundamentally simple physical laws. These laws allow us to predict the future, but only as a matter of probability, and only on a large scale. The quantum-computational nature of the universe dictates that the details of the future are intrinsically unpredictable. They can be computed only by a computer the size of the universe itself. Otherwise, the only way to discover the future is to wait and see what happens. Allow me to introduce myself. The first thing I remember is living in a chicken house. My father was apprenticed to a furniture maker in Lincoln, Massachusetts, and the chicken house was in back of her barn. My father turned the place into a two-room apartment; the space where the chickens had roosted became bunks for my older brother and me. (My younger brother was allowed a cradle.) At night, my mother would sing to us, tuck us in, and close the wooden doors to the roosts, leaving us to lie snug and stare out the windows at the world outside. My first memory is of seeing a fire leap up in a wire trash basket with an overlapping diamond pattern. Then I remember holding tight to my mother's blue-jeaned leg just above the knee and my father flying a Japanese fighter kite. After that, memories crowd on thick and fast. Each living being's perception of the world is unique and crowded with detail and structure. Yet we all inhabit the same space and are governed by the same physical laws. In school, I learned that the physical laws governing the universe are surprisingly simple. How could it be, I wondered, that the intricacy and complexity I saw outside my bedroom window was the result of these simple physical laws? I decided to study this question and spent years learning about the laws of nature. Heinz Pagels, who died tragically in a mountaineering accident in Colorado in the summer of 1988, was a brilliant and unconventional thinker who believed in transgressing the conventional boundaries of science. He encouraged me to develop physically precise techniques for characterizing and measuring complexity. Later, under the guidance of Murray Gell-Mann at Caltech, I learned how the laws of quantum mechanics and elementary-particle physics effectively "program" the universe, planting the seeds of complexity. These days, I am a professor of mechanical engineering at the Massachusetts Institute of Technology. Or, because I have no formal training in mechanical engiLloyd, Seth is the author of 'Programming the Universe A Quantum Computer Scientist Takes on the Cosmos', published 2007 under ISBN 9781400033867 and ISBN 1400033861.