Places I Never Meant to Be Original Stories by Censored Writers 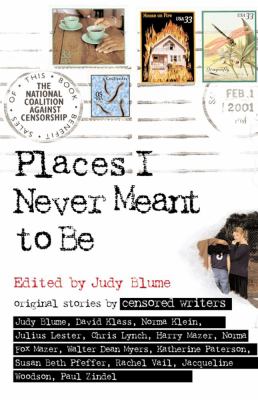 Introduction When I was growing up I'd heard that if a movie or book was "Banned in Boston" everybody wanted to see it or read it right away. My older brother, for example, went to see such a movie --The Outlaw,starring Jane Russell -- and I wasn't supposed to tell my mother. I begged him to share what he saw, but he wouldn't. I was intensely curious about the adult world and hated the secrets my parents, and now my brother, kept from me.A few years later, when I was in fifth grade, my mother was reading a novel calledA Rage to Live,by John O'Hara, and for the first time (and, as it turned out, the only time) in my life, she told me I was never to look at that book, at least not until I wasmucholder. Once I knew my mother didn't want me to read it, I figured it must be really interesting!So, you can imagine how surprised and delighted I was when, as a junior in high school, I found John O'Hara's name on my reading list. Not a specific title by John O'Hara, butanytitle. I didn't waste a minute. I went down to the public library in Elizabeth, New Jersey, that afternoon -- a place where I'd spent so many happy hours as a young child, I'd pasted a card pocket on the inside back cover of each book I owned -- and looked forA Rage to Live.But I couldn't find it. When I asked, the librarian told methatbook wasrestricted.It was kept in a locked closet, and I couldn't take it out without written permission from my parents.Aside from my mother's one moment of fear, neither of my parents had ever told me what I could or could not read. They encouraged me to read widely. There were no "Young Adult" novels then. Serious books about teenagers were published as adult novels. It was my mother who handed meTo Kill a Mockingbirdand Anne Frank'sDiary of a Young Girlwhen they were first published.By the time I was twelve I was browsing in the bookshelves flanking the fireplace in our living room where, in my quest to make sense of the world, I discovered J.D. Salinger'sThe Catcher in the Rye,fell in love with the romantic tragedies of Thomas Hardy and the Bronte sisters, and overidentified with "Marjorie Morningstar."But at the Elizabeth Public Library the librarian didn't care. "Get permission in writing," she told me. When I realized she was not going to let me check outA Rage to Live,I was angry. I felt betrayed and held her responsible. It never occurred to me that it might not have been her choice.At home I complained to my family, and that evening my aunt, the principal of an elementary school, brought me her copy ofA Rage to Live.I stayed up half the night reading the forbidden book. Yes, it was sexy, but the characters and their story were what kept me turning the pages. Finally, my curiosity (about that book, anyway) was satisfied. Instead of leading me astray, as my mother must have feared, it led me to read everything else I could find by the author.All of which brings me to the questionWhat is censorship?If you ask a dozen people you'll get twelve different answers. When I actually looked up the word inThe Concise Columbia EncyclopediaI found this definition: "[The] official restriction of any expression believed to threaten the political, social, or moral order." My thesaurus lists the following words that can be used in place ofban(as in book banning):Forbid. Prohibit. Restrict.But what do these words mean to writers and the stories they choose to tell? And what do they mean to readers and the books they choose to read?I began to write when I was in my mid-twenties. By then I was married with two small children and desperately in need of creative work. I wroteAre You There God? It's Me, Margaretright out of my own experiences and feelings when I was in sixth grade. Controversy wasn't on my mind. I wanted only to write what I knew to be true. I wanted toBlume, Judy is the author of 'Places I Never Meant to Be Original Stories by Censored Writers', published 2001 under ISBN 9780689842580 and ISBN 0689842589.