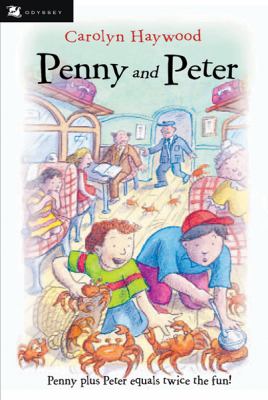 Penny's father and mother had adopted Penny when he was a tiny baby. They had waited for him a long time but when they found Penny, he was exactly what they wanted. They named him William but they called him Penny because his curly hair was just the color of a brand-new copper penny. When Penny was six years old, he started to go to school. There he met Peter who was eight. He was the best baseball player in the school. Peter lived in a children's orphanage because he didn't have any father or mother. The two boys were so fond of each other that Penny's father and mother took Peter to the seashore with them for the summer. At the end of the summer, they decided to adopt Peter. So, when the summer vacation was over and it was time to return home, the two little boys knew that they were going to be really truly brothers. "Really truly brothers for ever and ever," said Penny. Mother and Daddy had decided to leave the seashore the week after Labor Day but Daddy had to make an unexpected business trip so he had to leave the day after Labor Day. Before he left, he put the sailboat away for the winter. Then he packed the car full of things that Mother said had to go back to town. When he finally drove off, there was nothing left for Mother and the boys to bring home on the train, along with Minnie, the cook, but one suitcase and the little traveling bag in which Really and Truly traveled. Really and Truly were Penny's kittens but by this time they had grown into two very handsome cats. "It's a great relief to have Daddy drive all of those things home," said Mother. "I would much rather go in the train. It is more comfortable than riding in the car with my feet in a pail and the floor mop hitting me on the head every time we turn a corner." "Do you remember last year," asked Penny, "when Daddy stopped suddenly and the basket of tomatoes upset just as I slid off the seat?" "I certainly do," said Mother. "And you landed right on top of those beautiful tomatoes. And was I angry!" "And did we have tomato juice!" cried Penny. "It was all over everything, wasn't it, Mother?" "It certainly was," said Mother. "But mostly all over you and the floor of the car." Penny laughed as he recalled the mess he had suddenly found himself in, with all those tomatoes. "We can laugh about it now," said Mother, "but it didn't seem very funny when it happened. This year, there will be nothing like that. We'll have a nice, quiet, peaceful trip home on the train." "When are we leaving?" asked Peter. "Next Monday," replied Mother. "We will go up on the two o'clock train. That will get us home before the rush hour." Monday morning, after the boys had had their breakfast, they wandered around the house. They didn't seem to know what to do with themselves. "Seems funny not to have the sailboat, doesn't it?" said Peter, as the boys sat on the dock swinging their feet. "Seems 'though we ought to go out in a boat the very last day," said Penny. "We could go out in the rowboat," said Peter. "All right, let's!" said Penny. "And let's catch some crabs and surprise Minnie. It would be nice to take some crabs home with us. Don't you think so, Peter?" "Yes," said Peter. "I love crabs. And we won't get any more until next summer." "Well then, we'll have to catch a fish for bait," said Penny. Penny ran to the garage to get their fishing tackle, while Peter hunted for a clam to use for fish bait. In a short time, the boys were settled on the end of the dock each with his line in the water. They were as quiet as two statues. Then Peter began to pull his line. He didn't jerk it but pulled it in carefully. "I've got one," he whispered to Penny. Penny looked down into the water. Sure enough, there on the end of Peter's line was a good-sized fish. It was fighting hard but Peter kHaywood, Carolyn is the author of 'Penny and Peter', published 2005 under ISBN 9780152052324 and ISBN 0152052321.