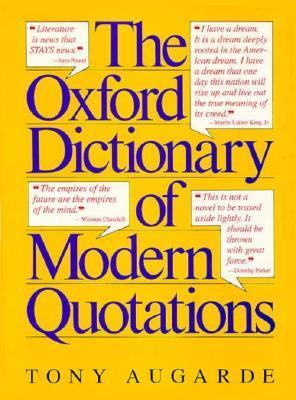 Winston Churchill and Franklin D. Roosevelt, Marcel Proust and Virginia Woolf, Martin Luther King and John F. Kennedy, Louis Armstrong and Mae West, Woody Allen and Dorothy Parker--these are but a few of the figures who have given voice to our century's most memorable quotations. Now, in The Oxford Dictionary of Modern Quotations, A.J. Augarde gathers together 6,000 of the best known quotes from our time, drawn from novels, plays, poems, essays, speeches, films, radio and television, songs, and even advertisements. Here readers will find the history-making quotes, from Churchill's stirring wartime speeches ("Never in the field of human conflict was so much owed by so many to so few"), to Neville Chamberlain's infamous "Peace for our time," to Spiro T. Agnew's outrageous "If you've seen one city slum you've seen them all." On the lighter side, readers will enjoy such wits as Woody Allen ("It's not that I'm afraid to die. I just don't want to be there when it happens"), Fran Lebowitz ("Food is an important part of a balanced diet"), and Dorothy Parker ("This is not a novel to be tossed aside lightly. It should be thrown with great force"). There are generous excerpts from literature, from the novels of Hemingway and Joyce, the poetry of Auden, Eliot, and Pound, the plays of Lillian Hellman and Anita Loos, and the lyrics of Irving Berlin and Cole Porter ("In olden days a glimpse of stocking / Was looked on as something shocking / Now, heaven knows, / Anything goes"). Augarde also includes famous book titles (such as Shepherd Mead's "How To Succeed in Business Without Really Trying"), song titles (Larry Morey's "Whistle While You Work"), even cartoon captions (Bill Maudlin's wartime "I feel like a fugitive from the law of averages"). And of course, the book brims with wisdom, from Count Ciano's "Victory has a hundred fathers, but defeat is an orphan," to Lord Morley's "You have not converted a man because you have silenced him," to Alfred Adler's "It is always easier to fight for one's principles than to live up to them." Designed both for reference and for browsing, the Dictionary arranges quotations in alphabetical order by author, with attributions after each quote so that readers can explore the original quotes in context. In addition, the index helps the reader trace quotations from their most important keywords, so that if you know the quote but not the author, you can still find it easily. Whether you want to find out who first used the expression "a walk on the wild side" (it was Nelson Algren) or simply enjoy discovering fine turns of phrase or witty remarks (such as Beatrice Lillie's off-the-cuff comment to a waiter who spilled soup on her dress: "Never darken my Dior again"), The Oxford Dictionary of Modern Quotations offers a unique view of the twentieth century through some of its most memorable lines.Augarde, Tony is the author of 'Oxford Dictionary of Modern Quotations' with ISBN 9780198661412 and ISBN 019866141X.

3 from $0.51
Loading marketplace prices 3 copies from $0.51 How does the rental process work?
View more