Once upon a Blue Moose 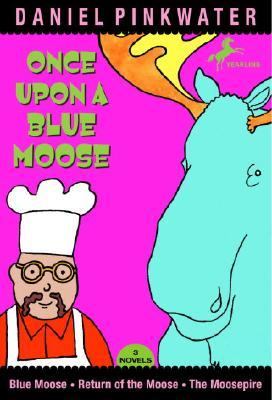 MOOSE MEETING Mr. Breton had a little restaurant on the edge of the big woods. There was nothing north of Mr. Breton's house except nothing, with trees in between. When winter came, the north wind blew through the trees and froze everything solid. Then it would snow. Mr. Breton didn't like it. Mr. Breton was a very good cook. Every day, people from the town came to his restaurant. They ate gallons of his special clam chowder. They ate plates of his special beef stew. They ate fish stew and Mr. Breton's special homemade bread. The people from the town never talked much and they never said anything about his cooking. "Did you like your clam chowder?" Mr. Breton would ask. "Yup," the people from the town would say. Mr. Breton wished they would say, "Delicious!" or, "Good chowder, Breton!" All they ever said was, "Yup." In winter they came on skis and snowshoes. Every morning Mr. Breton went out behind his house to get firewood. He wore three sweaters, a scarf, galoshes, a woolen hat, a big checkered coat, and mittens. He still felt cold. Sometimes animals came out of the woods to watch Mr. Breton. Raccoons and rabbits came. The cold didn't bother them. It bothered Mr. Breton even more when they watched him. One morning there was a moose in Mr. Breton's yard. It was a blue moose. When Mr. Breton went out his back door, the moose was there, looking at him. After a while, Mr. Breton went back in, closed the door, and made a pot of coffee while he waited for the moose to go away. It didn't go away; it just stood in Mr. Breton's yard, looking at his back door. Mr. Breton drank a cup of coffee. The moose stood in the yard. Mr. Breton opened the door again. "Shoo! Go away!" he said. "Do you mind if I come in and get warm?" the moose said. "I'm just about frozen." The moose brushed past him and walked into the kitchen. His antlers almost touched the ceiling. The moose sat down on the floor next to Mr. Breton's stove. He closed his eyes and sat leaning toward the stove for a long time. Mr. Breton stood in the kitchen, looking at the moose. The moose didn't move. Wisps of steam began to rise from his blue fur. After a long time the moose sighed. It sounded like a foghorn. "Can I get you a cup of coffee?" Mr. Breton asked the moose. "Or some clam chowder?" "Clam chowder," said the moose. Mr. Breton filled a bowl with creamy clam chowder and set it on the floor. The moose dipped his big nose into the bowl and snuffled up the chowder. He made a sort of slurping, whistling noise. "Sir," the moose said, "this is wonderful clam chowder." Mr. Breton blushed a very deep red. "Do you really mean that?" "Sir," the moose said, "I have eaten some very good chowder in my time, and yours is the very best." "Oh my," said Mr. Breton, blushing even redder. "Oh my. Would you like some more?" "Yes, with crackers," said the moose. The moose ate seventeen bowls of chowder with crackers. Then he had twelve pieces of hot gingerbread and forty-eight cups of coffee. While the moose slurped and whistled, Mr. Breton sat in a chair. Every now and then he said to himself, "Oh my. The best he's ever eaten. Oh my." Later, when some people from the town came to Mr. Breton's house, the moose met them at the door. "How many in your party, please?" the moose asked. "I have a table for you; please follow me." The people from the town were surprised to see the moose. They felt like running away, but they were too surprised. The moose led them to a table, brought them menus, looked at each person, snorted, and clumped into the kitchen. "There are some people outside; I'll take care of them," he told Mr. BretPinkwater, Daniel M. is the author of 'Once upon a Blue Moose ' with ISBN 9780440420835 and ISBN 0440420830.