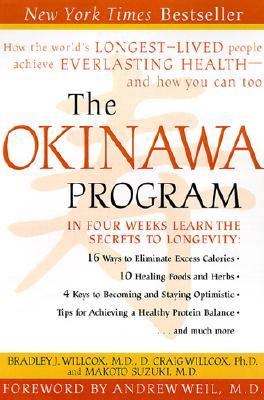 FOREWORD by Andrew Weil, M.D. Everyone wants to know how to live as long as possible and how to have the good health to enjoy it. Whenever we meet especially long-lived individuals, wt always ask about their secrets of longevity and healthy aging, unfortunately, the answers they give are totally inconsistent, from daily walks to daily cigars. We are also fascinated by reports of societies in remote parts of the earth that boast of unusual numbers of healthy old people. Most of the reports turn out to be groundless. One that may not concerns the islands of Okinawa, formerly the Kingdom of the Ryukyus, now a prefecture of Japan. In the West, Okinawa is known as the only Japanese home territory on which the Second World War was fought -- the battle of Okinawa was one of the longest and bloodiest of the war -- and as the site of American military bases. Okinawans, particu1arly older Okinawans, have experienced unusual social turmoil in their lives. Nonetheless there are more centenarians there than anywhere else in the world, and the Okinawan population enjoys much greater health and longevity than other Japanese. And the Japanese have the best health and greatest longevity on the planet. Moreover, thanks to meticulous keeping of birth and health records in the islands, there is no doubt about the veracity of claims to longevity, as there is in other regions that have been promoted as conducive to long life. The fundamental question to be asked about this population is how much of the good health and longevity is genetic and how much is environmental. It is impossible to answer it definitively, but I am inclined to think Genetic factors are not the major cause. I say that because research on aging is generally demonstrating the overwhelming influence of such lifestyle factors as regular physical activity and social connectedness. Also younger Okinawans, who are abandoning traditional ways in favor of those of contemporary Japan and America, are beginning to show the expected declines in health and growing incidence of Western disease. I have made many trips to Japan over the past forty years, but I have been to Okinawa only once, in November of 1999, when I went to the main island to lecture, meet local shamans and healthy oldsters, and get a little sense of cultural, especially dietary, differences from the rest of Japan. On that occasion I met the authors of this book and first learned about their research project on successful aging. My experiences during that brief visit left me eager to return, to see more of the islands and its remarkable people, and to learn more about what Drs. Willcox and Suzuki call "the Okinawa way to everlasting health." At first meeting Okinawans seem different -- both from Westerners and from other Japanese. They look different, have quite different customs, and eat very different foods, including a great deal of bitter melon and turmeric tea, for example. But, as you will learn in this scientifically factual and highly readable book, the general principles of living the Okinawa way are not foreign. Indeed, they are highly accessible to everyone and quite consistent with the latest medical research on healthy lifestyles and healthy aging. They include getting lifelong, regular physical activity, eating a mostly plant-based diet that includes fish and soy foods with a great variety of vegetables and moderate amounts of the right kinds of fat, and enjoying strong social and community support as well as a sense of independence and self-responsibility for health. This book is not about magic potions or age-erasing supplements. It is a realistic, very thorough look at a remarkable society that has mostly escaped notice by Western medical researchers. I congratulate the authors on doing such an excellent job of introducing the health-promoting culture of Okinawa to Western readers. I look forward to learning about more of the findings of their ongoing research. In readinWillcox, Bradley J. is the author of 'Okinawa Program How the World's Longest-Lived People Achieve Everlasting Health-And How You Can Too' with ISBN 9780609807507 and ISBN 0609807501.