Of One Blood Or, the Hidden Self 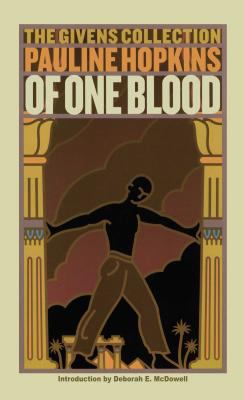 Chapter One The recitations were over for the day. It was the first week in November and it had rained about every day the entire week; now freezing temperature added to the discomfiture of the dismal season. The lingering equinoctial whirled the last clinging yellow leaves from the trees on the campus and strewed them over the deserted paths, while from the leaden sky fluttering snow-white flakes gave an unexpected touch of winter to the scene.The east wind for which Boston and vicinity is celebrated, drove the sleet against the window panes of the room in which Reuel Briggs sat among his books and the apparatus for experiments. The room served for both living and sleeping. Briggs could have told you that the bareness and desolateness of the apartment were like his life, but he was a reticent man who knew how to suffer in silence. The dreary wet afternoon, the cheerless walk over West Boston bridge through the soaking streets had but served to emphasize the loneliness of his position, and morbid thoughts had haunted him all day: To what use all this persistent hard work for a place in the world -- clothes, food, a roof? Is suicide wrong? he asked himself with tormenting persistency. From out the storm, voices and hands seemed beckoning him all day to cut the Gordian knot and solve the riddle of whence and whither for all time.His place in the world would soon be filled; no vacuum remained empty; the eternal movement of all things onward closed up the gaps, and the wail of the newly-born augmented the great army of mortals pressing the vitals of mother Earth with hurrying tread. So he had tormented himself for months, but the courage was yet wanting for strength to rend the veil. It had grown dark early. Reuel had not stirred from his room since coming from the hospital -- had not eaten nor drank, and was in full possession of the solitude he craved. It was now five o'clock. He sat sideways by the bare table, one leg crossed over the other. His fingers kept the book open at the page where he was reading, but his attention wandered beyond the leaden sky, the dripping panes, and the sounds of the driving storm outside.He was thinking deeply of the words he had just read, and which the darkness had shut from his gaze. The book was called "The Unclassified Residuum," just published and eagerly sought by students of mysticism, and dealing with the great field of new discoveries in psychology. Briggs was a close student of what might be termed "absurdities" of supernatural phenomena or mysticism, best known to the every-day world as "effects of the imagination," a phrase of mere dismissal, and which it is impossible to make precise; the book suited the man's mood. These were the words of haunting significance:"All the while, however, the phenomena are there, lying broadcast over the surface of history. No matter where you open its pages, you find things recorded under the name of divinations, inspirations, demoniacal possessions, apparitions, trances, ecstasies, miraculous healing and productions of disease, and occult powers possessed by peculiar individuals over persons and things in their neighborhood."The mind-curers and Christian scientists, who are beginning to lift up their heads in our communities, unquestionably get remarkable results in certain cases. The ordinary medical man dismisses them from his attention with the cut-and-dried remark that they are 'only the effects of the imagination.' But there is a meaning in this vaguest of phrases."We know a non-hysterical woman who in her trances knows facts which altogether transcend her possible normal consciousness, facts about the lives of people whom she never saw or heard of before. I am well aware of all the liabilities to which this statement exposes me, and I make it deliberately, having practically no doubt whatever of its truth."Presently Briggs threw the book down, and, rising from his chair, beganHopkins, Pauline is the author of 'Of One Blood Or, the Hidden Self' with ISBN 9780743467698 and ISBN 0743467698.