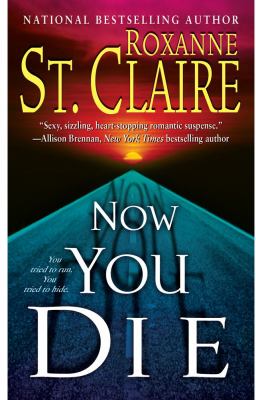 Chapter OneAstor Cove, New York The Hudson River Valley Late Summer, 2008Lucy Sharpe woke to the sound of gunfire. Steady. Distant. Infuriating.She rolled out of bed and strode to the window, totally naked, completely awake, and royally pissed. Who the hell was taking target practice at three in the morning?She peered at the training compound a half mile away, a few security lights casting yellow circles around the perimeter, but otherwise dark. Only one man had the nerve to do something like this.Jack Culver. A master at worming his way into places he didn't belong.She resisted looking at the empty bed behind her. Instead, she scooped up her satin drawstring pajama pants and stepped into them, then yanked the matching camisole over her head.As she flipped her hair out from underneath the thin fabric, she snagged her G-23, checked the magazine, then headed out of her room. Barefoot, armed, and riled enough to scare the crap out of that son of a bitch, she padded down the long, dark hallway that separated her private living quarters from the rest of the ten-thousand-square-foot mansion.At the top of the stairs, she paused at the library doors, considering a change in plans. Most nights when she couldn't sleep, she fought the demons by working, coordinating the resources of her successful security and investigation firm and focusing on problems she could solve. Present-day problems, not ancient ones that were out of her control.But tonight wasn't most nights. And the demons weren't in her head, they were in her compound. One demon, anyway.And this one was staying at the Bullet Catchers' guesthouse, invading the Bullet Catchers' war room, and infiltrating her carefully constructed, perfectly organized, highly efficient world. And using her firing range as his personal playground in the middle of the night.How the hell had he managed it? She'dfiredhim. And yet...he'd managed to wrangle an invitation back. A temporary one, anyway.Another gunshot echoed.He wasn't evenallowedto fire a gun. Downstairs she stabbed at the alarm pad in the kitchen and stepped outside into the night air, the temperature in the Hudson Valley suspended between the final dog days of August and the first nip of autumn.The stone path was cool under her feet as she moved soundlessly, passing the guesthouse. This smaller version of her own Tudor mansion was dark for the night, the bodyguards and security specialists who were at headquarters for training or for assignment briefings all asleep now.Another round popped.Not all of them. The shots were slower now, as if he'd switched to a .45 and the recoil -- and that wounded trigger finger -- had changed his rhythm. And the echo told her he was out on the straight range, behind the two-story live fire house they used for training.Breaking every rule and pissing her off: that would definitely be Jack.She stayed in the shadows, following a half-mile hilly path to the training compound. When she reached the classroom and simulation facility, she stealthily moved around the building.She saw the target silhouettes, five of them static, others moving on a cable between them. She heard him rack the semiautomatic he had no right carrying, let alone firing, and then the shuffle of his foot as he took his stance.She inched out and lifted her Glock, her eyes on the central moving target. When she smacked that silhouette right in the heart, he'd get the message to stop. She slipped her finger over the trigger just as the moon came out from behind a cloud, spilling silver light all over the range...and over Jack.She couldn't look away. She could barely breathe.His dark hair tumbled down to broad, bare shoulders, the carved angles of his back shadowed and smooth. He aimed his gun with steady, tensed arms, his legs in a wide stance. He wore only jeans that were slung low on his narrow hips and fitted over his hard, cSt. Claire, Roxanne is the author of 'Now You Die, Vol. 3' with ISBN 9781416552444 and ISBN 1416552448.