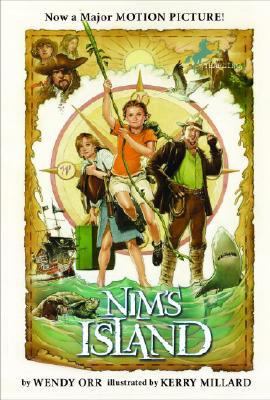 1 In a palm tree, on an island, in the middle of the wide blue sea, was a girl. Nim's hair was wild, her eyes were bright, and around her neck she wore three cords. One was for a spyglass, one for a whorly, whistling shell, and one for a fat red pocketknife in a sheath. With the spyglass at her eye, she watched her father's boat. It sailed out through the reef to the deeper dark ocean, and Jack turned to wave and Nim waved back, though she knew he couldn't see. Then the white sails caught the wind and blew him out of sight, and Nim was alone. For three days and three nights, whatever happened or needed doing, Nim would do it. "And what we need first," said Nim, "is breakfast!" So she threw four ripe coconuts thump! into the sand and climbed down after them. Then she whistled her shell, two long, shrill notes that carried far out to the reef, where the sea lions were fishing. Selkie popped her head above the water. She had a fish in her mouth, but she swallowed it fast and dived toward the beach. And from a rock by the hut, Fred came scuttling. Fred was an iguana, spiky as a dragon, with a cheerful snub nose. He twined round Nim's feet in a prickly hug. "Are you saying good morning," Nim demanded, "or just begging for breakfast?" Fred stared at the coconuts. He was a very honest iguana. Coconuts are tricky to open, but Nim was an expert. With a rock and a spike, she punched a hole and drank the juice, cracked the shell and pried out the flesh. Fred snatched his piece and gulped it down. Marine iguanas don't eat coconut, but no one had ever told Fred. Now Selkie was flopping up the beach to greet them. "We'll come in, too!" Nim shouted, and dived off the rocks. Selkie twisted and shot up underneath, gliding Nim through the waves: thumping over, ducking under. Nim clung tight, till she was half sea lion and half girl, and all of her was part ocean. Then Selkie and Fred went to sunbake on the rock and Nim went back to the hut. She poured a mug of water from her favorite blue bottle, brushed her teeth above a clump of grass that needed the spit, and started her chores. There were lots today, because she was doing some of Jack's as well as her own. Long ago, when Nim was a baby, she'd had a mother as well as Jack. But one day, her mother had gone to investigate the contents of a blue whale's stomach. It was an interesting experiment that no one had done for thousands of years, and Jack said that it would have been all right, it should have been safe--until the Troppo Tourists came to make a film of it, shouting and racing their huge pink-and-purple boat around Nim's mother and the whale. When Jack told them to stop, they made rude signs and bumped their boat against the whale's nose. The whale panicked and dived, so deep that no one ever knew where or when he came back up again. Nim's mother never came back up at all. So Jack packed his baby into his boat and sailed round and round the world, just in case Nim's mother came back up out of the ocean somewhere else and didn't know where to find them. Then one day, when the baby had grown into a very little girl, he'd found this island. It was the most beautiful island in the whole world. It had white shell beaches, pale gold sand, and tumbled black rocks where the spray threw rainbows into the sky. It had a fiery mountain with green rain forest on the high slopes and grasslands at the bottom. There was a pool of fresh water to drink and a waterfall to slide down, and, in a hidden hollow where the grasslands met the white shell beach, there was--"A place for a hut!" And around it all, so that only the smallest boats could weave their way through, was a maze of reef, curving from the black rocks on one side to the white cliffs on the other. Jack sailed back to a city for the very lOrr, Wendy is the author of 'Nim's Island', published 2008 under ISBN 9780385736060 and ISBN 0385736061.