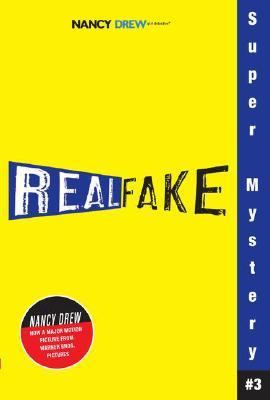 Chapter One: A Surprising Invitation When the phone call came, it wasn't at the most convenient moment. I was in my bedroom, crawling around my hands and knees, searching for an elusive running shoe. "I know you're here somewhere," I said out loud as I peered under the bed, the desk, the dresser. I loved solving mysteries, but locating missing footwear was not my idea of fun. At least I knew where the left one was; I was wearing it, along with a T-shirt and sweats. It was a beautiful, sunny autumn day, and I was about to go for a run...if only I could crack The Case of the Missing Right Shoe. Just as I was fishing a dust bunny-covered scarf out from under the nightstand, the phone started to ring. From down the hall, I heard my father call out: "Can you get that, Nancy? I'm on my cell!" I jumped to my feet, bumping my head on something along the way. "Ow," I muttered under my breath as I picked up the phone. "Hello?" I said, probably a shade abruptly. "Could I speak to Nancy Drew, please?" I didn't recognize the fast-talking female voice. "Speaking." "Hi, Nancy, this is Dee Darby fromMystery Solved!" I did a mental double take.Mystery Solved!was one of the most popular reality shows on television. It involved regular people acting like professional detectives and solving made-up mysteries. Each episode took place in a different part of the world. One episode had involved a kidnapped heiress in Hong Kong. Another had featured a rare orchid thief in Brazil. Dee Darby was the show's creator, executive producer, and host. She wasMystery Solved!"Why was she callingme? "Hi, Ms. Darby," I managed after I'd gotten over my total shock. "I'm sure you know what this is about," Dee Darby said briskly. Before I had a chance to say "Not in the least," she breezed on. "You, Nancy Drew, have been selected to compete in the next episode ofMystery Solved!Congratulations!" My jaw dropped. I felt for the edge of my bed and sat down slowly. I realized that I was still holding the dusty scarf in my hand. I couldn't believe I was going to be a contestant on a reality show! It had all started six months ago, with an innocent Saturday night of TV watching with my two best friends, George Fayne and Bess Marvin. The three of us had been at George's house, watching the Hong Kong episode and chowing down on a new brand of organic microwave parmesan cheese popcorn that Bess had discovered. When the call for entrants flashed across the TV screen, the two cousins had launched into a full-court press: "Come on, Nancy, you've got to do it!" "You're the best detective in River Heights!" "You're way smarter than that Bucky person who found the missing heiress!" "We dare you!" "We double-dare you!" Et cetera, et cetera. I had said no about a hundred times, but it hadn't done any good. I finally agreed, just to shut them up. Right then and there, George had logged onto the show's website on one of her many laptops and I had filled out the online entry form, complete with a 250-word essay on why I would be a greatMystery Solved!contestant. Among other things, I had mentioned that I'd solved lots of local crimes and cases as an amateur detective-slash-concerned citizen-slash-mystery lover. It's just for fun, I had told myself. There's no harm in playing along. The chances of getting picked are a zillion to one.... "My assistant producer Elizabeth will overnight the paperwork to you," Dee Darby was saying in her mile-a-minute voice. "Make sure you read the show's rules and regulations handbook with a fine-tooth comb. We'll need the contract back from you within the week, signed and notarized. Oh, and do you have a recent color photo of yourself that you could e-mail to us in jpeg format -- say, this afternoon? And before I forget, we have to schedule a time to send a crew to your house. As you know,Keene, Carolyn is the author of 'Nancy Drew Super Mystery 3 ', published 2007 under ISBN 9781416938811 and ISBN 1416938818.