My Life As a Furry Red Monster What Being Elmo Has Taught Me About Life, Love, and Laughing Out Loud 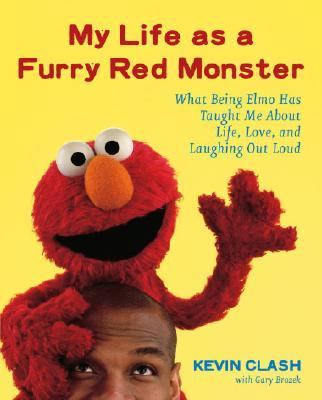 1 Love When I tell folks what I do for a living ("What'dya mean you'reElmo?You're a forty-five-year-old six-foot African American male with a deep voice, get outta here"), after they regain their composure, they ask me to explain Elmo's popularity. Elmo is instantly recognizable in nearly every country in the world. He knows heads of state, A-list celebrities, world-class athletes, Oscar winners, Tony winners, Grammy winners, spelling-bee winners, and lots of babies. If Elmo had a cell phone, it would never stop ringing. Why is this little fur-and-foam bundle of energy such a phenomenon? I have a one-word answer: love. Elmo connects with children and adults on the purest and most fundamental level, and that is the human desire to love and be loved. It's as simple as that. Though I've said "Elmo loves you" thousands of times, maybe millions, the thrill remains because children crave hearing that they are loved. (So do most adults, even if they won't admit it.) And kids love to say it back--"I love you, too!"--and you know they mean it, no matter how many times they say it. "I love you." Those are magic words--basic, simple, easy to say, but as adults we often forget their power. We often forget to say them. But Elmo reminds me on a daily basis that love is the foundation for a happy life. And before we can love each other, we have to learn to love ourselves. Back home in Turner's Station, a blue-collar community located just east of downtown Baltimore, Maryland, there was plenty of love to go around. In fact, my mom had so much love to give that she shared it with all the neighbor kids, running a family-style daycare center out of our two-bedroom, one-bath home. My siblings--Georgie (the oldest, George Jr.), big sister Anita (we called her Ne-Ne), and little sister Pam--grew up in a kind of kid heaven, where children and love naturally intersected and were never in short supply. Money, however, was. Officially, my hometown is called Turner Station, but we always referred to it as Turner's Station--just tradition among the locals, I guess. It's fitting that the name confusion exists, because there really are two towns in my mind--the Turner's Station of my youth and memory and the Turner Station of a harsher reality. My father worked hard as a flash welder operator at Raymond Metals to put a roof over our heads, and Mom's daycare work supplemented his income. But that said, I never, ever felt poor in that house, though there were days when all we had for dinner were mayonnaise sandwiches. Our small brick ranch house on New Pittsburgh Avenue was an unremarkable structure, not much different (at least on the outside) from most others in the neighborhood. It had a side entry and a two-step cement stoop where the neighborhood men often sat smoking and chatting in the quiet of a summer's evening. A chain-link fence kept the constant flow of bicycle, tricycle, wagon, hopscotch, and jump-rope traffic off our small patch of lawn and out of the few geraniums, petunias, and four-o'clocks my mother tried to keep thriving in her front-yard garden. If our property was remarkable in any way, it was because we had two sheds in the backyard instead of the usual one. My father was, and is, an inveterate pack rat. His excuse was that in addition to his day job, he brought in money by being a neighborhood handyman. So any scrap he could salvage from a demolition or remodeling job went into the bursting-at-the-seams shed. "You can't believe what someone threw away today," he'd announce at dinner, recounting his latest find. Before long, like my dad, I started saving and salvaging my own scraps--old buttons, fabric, a worn-out fuzzy slipper, odd bits of plastic or Styrofoam, boxes--any materials that I could turn into the simple puppets I began building and fiddling with as a child. Now, lest you staClash, Kevin is the author of 'My Life As a Furry Red Monster What Being Elmo Has Taught Me About Life, Love, and Laughing Out Loud', published 2006 under ISBN 9780767923750 and ISBN 0767923758.