My Brain Is Open The Mathematical Journeys of Paul Erdos 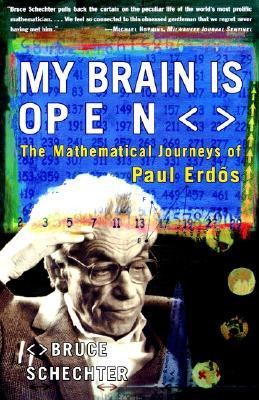 Chapter One: Traveling The call might come at midnight or an hour before dawn -- mathematicians are oddly unable to handle the arithmetic of time zones. Typically, a thickly accented voice on the other end of the line would abruptly begin: "I am calling from Berlin. I want to speak to Erdos." "He's not here yet.""Where is he?""I don't know.""Why don't you know?"Click! Neither are mathematicians always observant of the social graces.For more than sixty years mathematicians around the world have been roused from their abstract dreams by such calls, the first of the many disruptions that constituted a visit from Paul Erdos. The frequency of the calls would increase over the next several days and would culminate with a summons to the airport, where Erdos himself would appear, a short, frail man in a shapeless old suit, clutching two small suitcases that contained all of his worldly possessions. Stepping off the plane he would announce to the welcoming group of mathematicians, "My brain is open!"Paul Erdos's brain, when open, was one of the wonders of the world, an Ali Baba's cave, glittering with mathematical treasures, gems of the most intricate cut and surpassing beauty. Unlike Ali Baba's cave, which was hidden behind a huge stone in a remote desert, Erdos and his brain were in perpetual motion. He moved between mathematical meetings, universities, and corporate think tanks, logging hundreds of thousands of miles. "Another roof, another proof," as he liked to say. "Want to meet Erdos?" mathematicians would ask. "Just stay here and wait. He'll show up." Along the way, in borrowed offices, guest bedrooms, and airplane cabins, Erdos wrote in excess of 1,500 papers, books, and articles, more than any other mathematician who ever lived. Among them are some of the great classics of the twentieth century, papers that opened up entire new fields and became the obsession and inspiration of generations of mathematicians.The meaning of life, Erdos often said, was to prove and conjecture. Proof and conjecture are the tools with which mathematicians explore the Platonic universe of pure form, a universe that to many of them is as real as the universe in which they must reluctantly make their homes and livings, and far more beautiful. "If numbers aren't beautiful, I don't know what is," Erdos frequently remarked. And although, like all mathematicians, he was forced to make his home in the temporal world, he rejected worldly encumbrances. He had no place on earth he called home, nothing resembling a conventional year-round, nine-to-five job, and no family in the usual sense of the word. He arranged his life with only one purpose, to spend as many hours a day as possible engaged in the essential, life-affirming business of proof and conjecture.For Erdos, the mathematics that consumed most of his waking hours was not a solitary pursuit but a social activity, a movable feast. One of the great mathematical discoveries of the twentieth century was the simple equation that two heads are better than one. Ever since Archimedes traced his circles in the sand, mathematicians, for the most part, have labored alone -- that is, until some forgotten soul realized that mathematics could be done anywhere. Only paper and pencil were needed, and those were not strictly essential. A table-cloth would do in a pinch, or the mathematician could carry his equations in his head, like a chessmaster playing blindfolded. Strong coffee, and in Erdos's case even more powerful stimulants, helped too. Mathematicians began to frequent the coffeehouses of Budapest, Prague, and Paris, which led to the quip often attributed to Erdos: "A mathematician is a machine for turning coffee into theorems." Increasingly, mathematical papers became the work of two, three, or more collaborators.Schechter, Bruce is the author of 'My Brain Is Open The Mathematical Journeys of Paul Erdos', published 2000 under ISBN 9780684859804 and ISBN 0684859807.