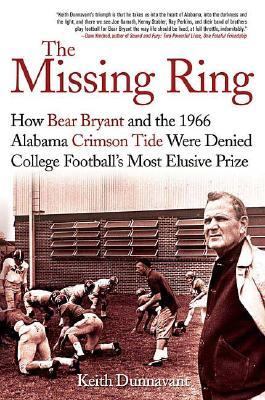 "Keith Dunnavant's triumph is that he takes us into the heart of Alabama, into the darkness and the light, and there we see Joe Namath, Kenny Stabler, Ray Perkins, and their band of brothers play football for Bear Bryant the way life should be lived, at full throttle, indomitably." ---Dave Kindred, author of "Sound and Fury: Two Powerful Lives, One Fateful Friendship" The Missing Ring" is more than a football book. It is both a story of a changing era and of an extraordinary team on a championship quest." Very few institutions in American sports can match the enduring excellence of the University of Alabama football program. Across a wide swath of the last century, the tradition-rich Crimson Tide has claimed twelve national championships, captured twenty-five conference titles, finished thirty-four times among the country's top ten, and played in fifty-three bowl games. Especially dominant during the era of the legendary Paul "Bear" Bryant, the larger-than-life figure who towered over the landscape like no man before or since, Alabama entered the 1966 season with the chance to become the first college football team to win three consecutive national championships. Every aspect of Bryant's grueling system was geared around competing for the big prize each and every year, and in 1966 the idea of the threepeat tantalized the players, pushing them toward greatness. Driven by Bryant's enthusiasm, dedication, and perseverance, players were made to believe intheir team and themselves. Led by the electrifying force of quarterback Kenny "Snake" Stabler and one of the most punishing defenses in the storied annals of the Southeastern Conference, the Crimson Tide cruised to a magical season, finishing as the nation's only undefeated, untied team. But something happened on the way to the history books. "The Missing Ring" is the story of the one that got away, the one that haunts Alabama fans still, and native Alabamian Keith Dunnavant takes readers deep inside the Crimson Tide program during a more innocent time, before widespread telecasting, before scholarship limitations, before end-zone dances. Meticulously revealing the strategies, tactics, and personal dramas that bring the overachieving boys of 1966 to life, Dunnavant's insightful, anecdotally rich narrative shows how Bryant molded a diverse group of young men into a powerful force that overcame various obstacles to achieve perfection in an imperfect world. Set against the backdrop of the civil rights movement, the still-escalating Vietnam War, and a world and a sport teetering on the brink of change in a variety of ways, "The Missing Ring" tells an important story about the collision between football and culture. Ultimately, it is this clash that produces the Crimson Tide's most implacable foe, enabling the greatest injustice in college football history. "Keith Dunnavant has written yet another fabulous book about the fabled Alabama football program. You will beamazed at how one of the great injustices in the history of college football cost them their rightful place in history. And you just thought the system was screwed up now." ---Jim Dent, author of "The Junction Boys" "Keith Dunnavant nails it: all the sacrifices the 1966 Alabama team made to win three national championships in a row, and how we were robbed at the ballot box." ---Jerry Duncan, one of the boys of 1966 "Dunnavant infuses reportage and passion into a tale that every Alabamian of a certain age knows: For all the crying about Penn State in 1969, Penn State in 1994, or Auburn in 2004, no team ever got shafted the way the 1966 Crimson Tide did. It's all here: the churning legs, the churning stomachs, and the dreaded gym classes where Bear Bryant's boys made the sacrifices he demanded in order to become champions. They conquered their opponents on the field, but proved to be no match for the politics of the day off the field. The '66 Tide is still waiting for the Missing Ring." "ThaDunnavant, Keith is the author of 'Missing Ring How Bear Bryant and the 1966 Alabama Crimson Tide Were Denied College Football's Most Elusive Prize', published 2007 under ISBN 9780312374327 and ISBN 0312374321.