Misconceptions: Truth, Lies, and the Unexpected on the Journey to Motherhood 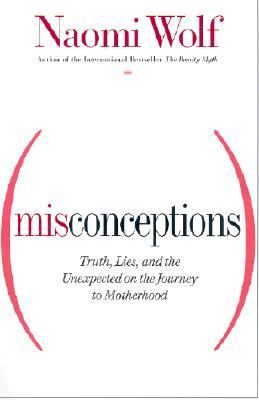 First Month: Discovery For us, how did it start? In an improbable place. My husband and I were surprised ourselves at our surroundings: in Italy, in a farmhouse outside of Todi, a Renaissance town made of stone the color of baked bread. We felt in those surroundings a bit like Twain's Connecticut Yankees in King Arthur's court--except that in this case the court was a wedding celebration of a friend of ours whose fiancee was the doyenne of a certain group of druggie glitterati. The wedding preparations that we watched from the sidelines involved a ragtag carnival of New York's disaffected, pale young people with dark sunglasses who populated the edges of the art world. The old sweetness of the beds of lavender and dusty thyme, and the bending olive trees, made strange contrast with the lounging, cattily gossiping bone-thin hangers-on to the wedding party. Everyone seemed still sweaty from the plane trip and acrid-smelling from too many Marlboro Lights. Behind the small veranda where we sat, louche ex-models were making pasta in the kitchen, dressed in black bikinis and the white high-heeled hiking boots that were having a brief vogue. They were chopping fresh basil on a century-old slab of white, gray-veined marble. The groom, a rakish young attorney, paced the sloping lawn where the ceremony would be held, looking pleased and scared. During a lull in the conversation, I gazed at my coffee and then at the line of the distant hills. A guest at the wedding, a part-time photographer or a gallery employee or a curator, with lank overprocessed blond hair and sharp features-a woman who had said nothing remarkable in my hearing for three days-suddenly leaned over toward me. She looked with a surprising compassion into my eyes and, still smoking ravenously, said, with absolute conviction: "You're pregnant." Was this some sort of conversation starter? Was this the New Age ramblings of someone who did not have much to say without resorting to the faux intuitive? Nonetheless, something was going on. Was my cycle disturbed by travel? By the rich food we'd been eating? By the medicine I was taking to ease a sore knee? When I went to wash my face some time later, my eyes in the mirror looked like nothing I'd ever seen before: yellowish and blurred, as if I were drunk. It must have been that which the wedding guest had seen. I thought maybe this had been caused by too much red Montepulciano wine, by jet lag, by anything, I half-prayed, but that thing. After the pied-piper band scattered to make its way back across the ocean to Soho, my husband and I stayed on for a week to see a little of the country. But even as I waited, day by day, the question always at the back of my consciousness as we went sightseeing or napped in our high, white-plastered rooms, I felt something indisputable: a sickness in my gut. It was a kind of nausea that was entirely new to me: it had a richness to it, as if I had gotten sick by ingesting pure gold. If a mountain of sweets had been touched by Midas, I felt, that's what I had in my belly. Ordinarily, when I've had scares, I've felt panic. This time, though, I felt far away from it. Every time I realized I could indeed be pregnant, I experienced, in spite of myself, a little thrill of joy. We were in Perugina, the town of candy. There were whole streets devoted to varieties of one kind of nougat made from an ancient recipe. And still I felt that sick sweetness, surrounded by sweetness. We asked a pleasant young woman pharmacist for a pregnancy kit. She leaned over very patiently and showed us the instructions in Italian, a language we did not understand at all: "Questa . . ." she said, speaking as if to a two-year-old and pointing at a picture of the strip with one line, "SI. Questa. . . ." she said, pointing to a picture of the strip with two lines: "NO." I recall a sense of abWolf, Naomi is the author of 'Misconceptions: Truth, Lies, and the Unexpected on the Journey to Motherhood' with ISBN 9780385493024 and ISBN 0385493029.