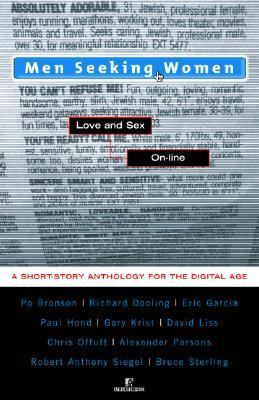 PRISONERS OF THE HEART Eric Garcia Ann-Marie Moore was finished with the world of men. Her last date had ended when the attorney with whom she'd been set up excused himself from the table, vanished into the cafe bathroom, and didn't emerge for three hours. Ann-Marie sat there the entire time, tapping her foot to the beat of the mediocre house band, staring at the double doors with murderous intensity. And when her date finally reappeared, glancing around the restaurant like a five-point buck on the first day of hunting season, he didn't respond to her calls or whistles. No, he kept on walking, past Ann-Marie, past the table, past the bar, out the front door and into the night. By the time she arrived home at her empty two-bedroom apartment at the end of the evening, her left heel broken, makeup streaked with tears, she realized that, all told, it was the best date she'd had in months. She was thirty-five years old, carried six thousand dollars' worth of credit card debt, and owned two cats, one of which she hadn't seen in weeks. This, predictably, was the male one. She had never been to Paris, though the prior summer she had spent three miserable days in the sweltering Las Vegas heat, and she could count the number of times she'd been truly drunk on seven fingers. Her mother called her every other day, at 8:00 p.m. precisely, and the first question out of her mouth was always whether or not Ann-Marie had eaten. The next question, of course, was about her love life. Most of the time, Mother was spoon-fed a meal of beautiful lies. For Ann-Marie had worked her way through the visible spectrum of males, finding herself deep in love and lust with men of all races and skin tones. Strong arms, strong backs, skinny legs, wide butts, caramel tones, pale faces; a smorgasbord of masculine delights. But one by one, regardless of their physical differences, regardless of their varying professions, hobbies, and personalities, each and every one of them had a single element in common, a collective trait that both identified and grouped them as members of the male gender: They left. At the end of the day, after the roses and the chocolates and the sweet whispers in bed, Jason and Miguel and Brian and T.J. and Elton and George and the rest of them found an escape clause in their vows of love and took off into the night. Walter flew the coop at high noon, actually, running out the front door with his jacket thrown over his shoulder, as if he were on a train platform and chasing after the 4:09 Southbound for Atlanta. So as of Sunday night at 11:34 p.m., Ann-Marie Moore was finished with the world of men, and good riddance to them. After fifteen years of hard dating, her bank account was substantially depleted, her bedframe was cracked in three places, and her self-esteem had found a tight little hole deep down inside some gutter in which to curl up and die. It was enough, and finally, gratefully, it was over. On Monday morning, flush with the excitement of a new, untested lifestyle, she treated herself to a bubble bath. Called in late to work, told them she had a spot of flu. She ran the hot water, submerged herself, closed her eyes, and drifted off to a world where men didn't walk out of restaurants and ignore their dates; where men didn't act like wild animals, treating women like gristle on the bone; where men were, finally, what all of the fairy tales and romance books said they were supposed to be: Men. And for an hour and a half, it was glorious. When the phone rang at eleven, she answered it out of habit. Realizing that she was still supposed to be ill, Ann-Marie flopped sideways in the bath, hanging her head off the edge in order to lend her voice the proper amount of nasal stuffiness. "Hello?" she said hoarsely. "I found him." ABronson, Po is the author of 'Men Seeking Women: Love and Sex On-Line' with ISBN 9780812991673 and ISBN 0812991672.

3 from $3.95
Loading marketplace prices 3 copies from $3.95 How does the rental process work?
View more