Manager As Negotiator Bargaining for Cooperation and Competitive Gain 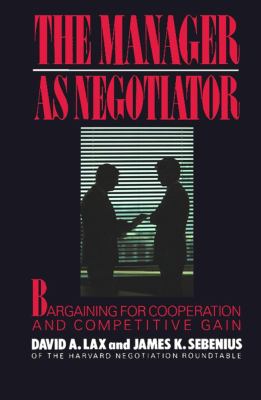 Chapter 1 The Manager as NegotiatorNegotiating is a way of life for managers, whether renting office space, coaxing a scarce part from another division, building support for a new marketing plan, or working out next year's budget. In these situations and thousands like them, some interests conflict. People disagree. And they negotiate to find a form of joint action that seems better to each than the alternatives.Despite its importance, the negotiation process is often misunderstood and badly carried out. Inferior agreements result, if not endless bickering, needless deadlock, or spiraling conflict. In this book, we diagnose the causes of these problems, show how they infect negotiations, and point the way to superior outcomes.Virtually everyone accepts the importance of bargaining to sell a building, resolve a toxic waste dispute, acquire a small exploration company, or handle like situations. Yet negotiation goes well beyond such encounters and their most familiar images: smoke-filled rooms, firm proposals, urgent calls to headquarters, midnight deadlines, and binding contracts. Though far less recognized, much the same process is involved when managers deal with their superiors, boards of directors, even legislators. Managers negotiate with those whom they cannot command but whose cooperation is vital, including peers and others outside the chain of command or beyond the organization itself. Managers even negotiate with subordinates who often have their own interests, understandings, sources of support, and areas of discretion.In a static world, agreements once made generally endure. Yet change calls on organizations to adapt. And rapid changes call for new arrangements to be envisioned, negotiated, and renegotiated among those who know the situation best and will have to work with the results.Certainly negotiation is a useful skill for important occasions, but it also lies at the core of the manager's job. Managers negotiate not only to win contracts, but also to guide enterprises in the face of change. Our task in this book is to show why this is so and how it can be done better.Thus we develop a special logic for negotiators, useful inside the organization and out. It is an ambitious agenda, one that we now introduce by describing a manager's continuing efforts to settle a lawsuit. Once we discuss the dilemma that trapped Les Winston in his negotiation with an "outside" party, we focus back "inside" the organization. There, the negotiations that occupy managers' lives run up against versions of the same dilemma.Les Winston's DilemmaMetallurgist Les Winston was sharing a drink with his old friend Tom, a noted analyst of negotiations. Les described his ongoing ordeal trying to settle a suit brought against him by the Ammetal Corp., his former employer. If Ammetal won in court, Les's two-year-old company would be forced down from its high-flying course into bankruptcy. And their latest settlement demand -- forhalfof his firm's revenues during the next ten years -- seemed ruinous. Concerned, Tom pressed for details.Les had joined Ammetal just after graduate school and had happily worked in their labs and testing facilities for the next nine years. Happily, that is, until he had a strong hunch that a new process might reduce production costs for an important specialty alloy, whose market Ammetal now dominated. While his boss had not forbidden him to work on this process, he had given Les no resources for it and had loaded him down with other tasks. Still, Les had devoted all his spare time to following up his hunch at home. Soon he was convinced that he had solved the problem and excitedly showed his results to his boss -- who again seemed unimpressed, dismissing Les's work as "inconclusive." In fact he urged Les to forget the whole thing since, in his judgment, the only improvement worth making required a radically different process that no one, iLax, David A. is the author of 'Manager As Negotiator Bargaining for Cooperation and Competitive Gain', published 1987 under ISBN 9780029187708 and ISBN 0029187702.

5 from $0.75
Loading marketplace prices 5 copies from $0.75 How does the rental process work?
View more