Love Is a Special Way of Feeling 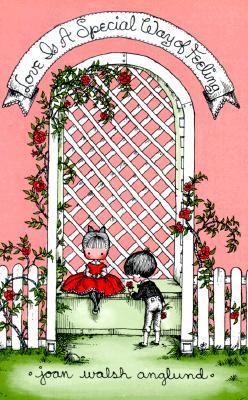 Joan Walsh Anglund was born on January 3rd, 1926, in Hinsdale, Illinois, a suburb of Chicago. Her father, Thomas Walsh, was a commercial artist and her mother, Mildred Walsh (nee Pfiefer) was a painter. Joan married Robert Anglund (radio and theatre work) on November 9th, 1947. They have two children, Joy and Todd (deceased), and two grandchildren, Emily and Thaddeus. All four have been models for Mrs. Anglund's drawings over the years. Joan and Robert Anglund currently live in a house, built in 1746, located in a small Connecticut town. Mrs. Anglund has traveled extensively - Mexico, Jamaica, England, Scotland, Ireland, Wales, Spain, France, Italy, Monaco, Switzerland, Sweden, Greece, Russia, Japan, Hong Kong - and has a certain fondness for rollercoasters!Mrs. Anglund studied art at the Chicago Art Institute (1944), and the American Academy of Art (1945), after which she became apprentice to Adele Roth, a commercial artist in Chicago. She worked at free-lance drawing until her first book was published by Harcourt Brace in 1958. Written after moving from their home in a small Illinois town to New York City, this book would garner critical acclaim and begin Joan Walsh Anglund's long, successful career as a writer/illustrator of childrens' books (she has also written some books of poetry for adults - see the "Bibliography" page).Since 1958, when her first book, A Friend Is Someone Who Likes You was published, Joan Walsh Anglund has written and illustrated more than 75 books which have sold more than 40,000,000 copies worldwide. Learn more about how and why she writes here.Each fall, for over 30 years, Joan Walsh Anglund has embarked on an extensive autographing tour where her fans line up for hours to purchase her latest book in which she will sign not only her name but also specially draw one of her delightful characters. Since February, 1979, Mrs. Anglund has written and illustrated the "Joan Walsh Anglund Children's Page" four times a year in Good Housekeeping Magazine . Her artwork has appeared on the covers of Ladies Home Journal , Good Housekeeping , Woman's Day , Better Homes and Gardens , Family Circle , and McCalls .In 1962, fourteen-inch rag dolls and six-inch pocket dolls, based on characters from her books, were the beginning of Joan Walsh Anglund merchandise. In the intervening years there have been a wide range of collectibles available including sheets, towels, bedspreads, all types of ceramics, needlepoint, children's wear and accessories, a large group of stationery items, tote bags, toys, etc. Hallmark, since 1979, has produced a line of greeting cards, gift wrap, stationary, albums, party goods and its mass market Ambassador division offered a similar grouping in 1984.Anglund, Joan Walsh is the author of 'Love Is a Special Way of Feeling' with ISBN 9780152023584 and ISBN 0152023585.

6 from $0.57
Loading marketplace prices 6 copies from $0.57 How does the rental process work?
View more