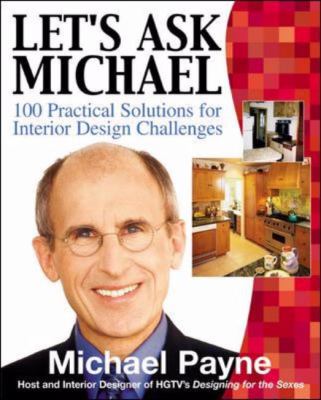 The master bedroom might be considered the epicenter of the his-her battle over interior design.

He will ogle the studded leather headboard; she will drool over tasseled pillows and lace.

And somewhere in the middle, HGTV interior designer Michael Payne will find a way to bring them together.

Payne, the star of Designing for the Sexes, will talk about creative ways to solve design problems and autograph copies of his book Let's Ask Michael: 100 Practical Solutions for Interior Design Challenges (McGraw-Hill, $24.95) during the House Beautiful Show Friday, April 18 at Reliant Center.

"The master bedroom is where you expect couples to want to be together," Payne said in a telephone interview that revealed his dry sense of humor. "But most women want an exhibition of femininity with lace and pillows and foo-foo. Some women will add pillows on the bed until they run out of real estate. A man doesn't want 8 million pillows on the bed."

But a woman will cringe at the thought of a leather headboard, so Payne tries to find a middle ground, perhaps with a carved wood or an upholstered headboard in a plan fabric for him and tasseled pillows -- in a limited number -- for her.

Then, if there's room, he can have his leather chair and she can have her upholstered chaise. Everyone's happy by the end of the show.

But don't expect Payne to help compromise on everything.

"I fight stuffed heads," he said. "I will make sure there is a wonderful display in the garage across from where he parks his SUV. He can press the garage-door opener and right in front of him will be his collection of stuffed animals. He can appreciate them right in his face."

Payne said he would love to take his show on the road some day, but for now he looks for people in the Los Angeles area where he lives.

One of the biggest criteria? Couples must have a "reasonable budget."

So these days, what's reasonable?

Payne said it depends on the project. You can't tear out and rebuild a kitchen for $5,000, as one wanna-be-on-the-show proposed.

One of the most fascinating parts of the show -- for Payne and viewers alike -- is the couple's relationship as they work through their design battle. "I think the show forces -- or allows -- couples to really communicate with each other, often for the first time," Payne said. "Often, it's the first time a man has been asked for his opinion on color or style. I can tell you that if a man were to go out and buy a truck tomorrow, he knows exactly what color he wants. So why wouldn't he have an opinion on the color of the sofa he's sitting on?"

By giving each person input, each has ownership.

...Editing a room -- taking stuff away to be replaced on a rotating basis -- is another way to make a room look fresh. Drama can come in the form of adding dimmers to light switches, he said.

Payne built his book of common decorating dilemmas around e-mails received from thousands of people who have watched the 5-year-old show, like whether it's okay to do the bathroom all in white (yes) or what to do with that giant television (hide it in a cabinet).

We couldn't resist asking for help on our own decorating dilemma: what to do with the dark wood paneling in a 1973 ranch-style home.

Payne said the best option, in his opinion, was to get rid of it and put in drywall. Stripping and bleaching the paneling in a lighter color is an option. And you can always paint it, but it will look like painted paneling, he said.

His favorite solution, and the most expensive: upholster the walls.

"The paneling gives you a surface for the staples. You can put a really beautiful fabric on the walls and it will not only look great, it will add sound insulation."...Payne, Michael is the author of 'Let's Ask Michael 100 Practical Solutions for Design Challenges' with ISBN 9780071416276 and ISBN 0071416277.