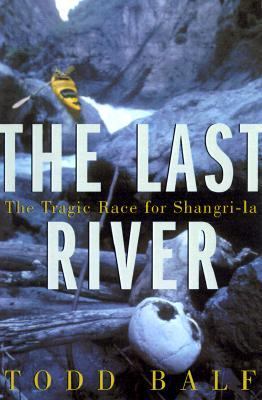 Great Falls of the Potomac, August 1975 Predawn, the Potomac River. Boyhood friends Wick Walker and Tom McEwan, now in their late twenties, and a young tagalong, Dan Schnurrenberger, stumble around their island campsite gathering up gear. They don helmets and spray skirts, grab paddles, and furtively slip into the swift but familiar current. The plan is simple: Before the park service is up and about -- the Virginia side of the Potomac is part of Great Falls National Park -- before anyone is up and about, they will paddle upstream a mile and a half to the base of Great Falls, then climb and rope-haul their boats to an overlook where they can scout the crux move of the seventy-five-foot drop one last time. Great Falls is a twisting, rock-jammed stretch of whitewater where the immense western river-sized volume of the Potomac abruptly plunges off the Piedmont Plateau to the coastal plains. Nobody has ever run the vertical falls. The conventional wisdom is that nobody will run the falls. As it is, some seven park visitors each year drown in the rapids. Most of them slip off the gorge's high cliffs and are swept into the fierce whirlpools at the bottom of the falls. The thrashing currents can hold a person for a long time. Some victims are never spat out. And yet Walker and McEwan, hotshot local whitewater racers, have been toying with the idea of a run down Great Falls almost as long as they can remember. Day after day they'd train at O-Deck Rapids and look the short distance upstream to the pounding, mist-shrouded cascade. Could they? At some point the pair began to believe something fundamentally different from what a million or so residents in metro D.C. and every single boater on the Potomac believed -- they could. Not only could they run it, but they'd show everyone that their endeavor wasn't the reckless act of thrill-seeking idiots but the work of shrewd, utterly rational individuals. After all, they weren't day campers out on a dare. Walker, fair-skinned and block-chester, was a decorated military officer stationed at nearby Fort Belvoir. McEwan, dark-complected and six-footer, was married, with a child on the way. They'd show that Great Falls was an objective that could be professionally trained and planned for, something they could study and know until the craziness had been wrung from it. In the years preceding that Sunday in August, they put the falls under their peculiar microscope. As far as they knew, nobody had ever boated off a major falls. They mapped the river's holes and eddies and drops at a myriad of water levels, then they went out and played guinea pigs at nearby, presumably less sinister, waterfalls. From West Virginia to North Carolina, they boated off increasingly high drops and even swam into the thrashing maelstrom at their base. In one episode McEwan didn't get flushed out for almost a minute. Part of what they were doing was river morphology -- understanding the chaotic behavior of a river at its wildest. Part of it was survivalist training -- keeping it together when every mental impulse screamed for hitting the panic button. Each experience added up to a kind of blueprint for what to do, or, more accurately, what not to do when boating off a vertical fall. By the time they scrambled up the cliffs above the first twenty-five-foot drop, the "Spout," they had a sense they'd done their homework, cracked the code. Moreover, they had a belief that they'd come to understand Great Falls (and, by extension, any other similarly monstrous and mythic river) for what it truly was -- rocks and water, as Tom put it. What it WAS. Not what their fears or other people's fears told them it was. And what it was was runnable. The river cascades seventy-five feet in two hundred yards and is defined by three distinct drops. They'd put in above the bottom falls and run that first. Then the middle and bottom together. Finally it is time to do the complete topBalf, Todd is the author of 'Last River' with ISBN 9780609606254 and ISBN 0609606255.