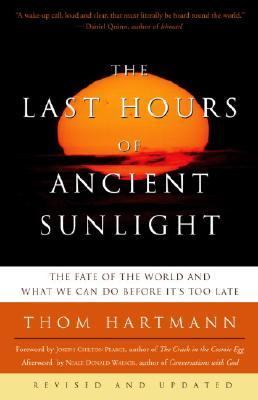 We're Running Out of Ancient Sunlight Where our energy came from, how we're "living beyond our means," and what will happen to our children when we run out It all starts with sunlight. Sunlight pours energy on the Earth, and the energy gets converted from one form to another, in an endless cycle of life, death, and renewal. Some of the sunlight got stored underground, which has provided us with a tremendous "savings account" of energy on which we can draw. Our civilization has developed a vast thirst for this energy, as we've built billions and billions of machines large and small that all depend on fuel and electricity. But our savings are running low, which will most likely make for some very hard times. In Part I we'll lay out the situation as a foundation for planning our response. Topics in Part I include: *The history of sunlight in the human story *How can things look okay yet be so bad? *The importance of trees--their three vital roles in a renewable environment, and some alarming statistics on what's happening as we cut them down *The accelerating rate of species extinction as we alter the world and its climate Let's start at the beginning, with the fuel source that gave life to this planet millions of years ago: sunlight. We're Made Out of Sunlight The Sun, the hearth of affection and life, pours burning love on the delighted earth. --Arthur Rimbaud (1854-1891) In a very real sense, we're all made out of sunlight. Sunlight radiating heat, visible light, and ultraviolet light is the source of almost all life on Earth. Everything you see alive around you is there because a plant somewhere was able to capture sunlight and store it. All animals live from these plants, whether directly (as with herbivores) or indirectly (as with carnivores, which eat the herbivores). This is true of mammals, insects, birds, amphibians, reptiles, and bacteria . . . everything living. Every life-form on the surface of this planet is here because a plant was able to gather sunlight and store it, and something else was able to eat that plant and take that sunlight energy in to power its body. In this way, the abundance or lack of abundance of our human food supply was, until the past few hundred years, largely determined by how much sunlight hit the ground. And for all non-human life- forms on the planet, this is still the case--you can see that many of the areas around the equator that are bathed in sunlight are Wlled with plant and animal life, whereas in the relatively sun-starved polar regions, where sunlight comes in at a thinned-out angle instead of straight-on, there are far fewer living creatures and less diversity among them. The plant kingdom's method of sunlight storage is quite straightforward. Our atmosphere has billions of tons of carbon in it, most in the form of the gas carbon dioxide, or CO(2). Plants "inhale" this CO(2), and use the energy of sunlight to drive a chemical reaction called photosynthesis in their leaves, which breaks the two atoms of oxygen free from the carbon, producing free carbon (C) and oxygen (O(tm)). The carbon is then used by the plant to manufacture carbohydrates like cellulose and almost all other plant matter--roots, stems, leaves, fruits, and nuts--and the oxygen is "exhaled" as a waste gas by the plant. Many people I've met believe that plants are made up of soil--that the tree outside your house, for example, is mostly made from the soil in which it grew. That's a common mistake. That tree is mostly made up of one of the gases in our air (carbon dioxide) and water (hydrogen and oxygen). Trees are solidified air and sunlight. Here's how it works: plant leaves capture sunlight and use that energy to extract carbon as carbon dioxide from the air, combine it with oxygen and hydrogen from water, to form sugars and othHartmann, Thom is the author of 'Last Hours of Ancient Sunlight The Fate of the World and What We Can Do Before It's Too Late', published 2004 under ISBN 9781400051571 and ISBN 1400051576.