Last Duel A True Story of Crime, Scandal, and Trial by Combat in Medieval France 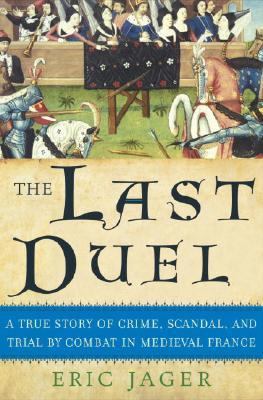 1 Carrouges In the fourteenth century it took several months for knights and pilgrims to travel from Paris or Rome to the Holy Land, and a year or more for friars and traders to journey across Europe and all the way to China along the Silk Road. Asia, Africa, and the still-undiscovered Americas had not yet been colonized by Europeans. And Europe itself had been nearly conquered by Muslim horsemen, who stormed out of Arabia in the seventh century, sailed from Africa to capture Sicily and Spain, and crossed swords with Christians as far north as Tours, France, before being turned back. By the fourteenth century, Christendom had faced the Muslim threat for more than six hundred years, launching repeated crusades against the infidel. When not united against its common foe, Christendom was often at war with itself. The kings and queens of Europe, a large extended family of brothers and sisters and intermarried cousins, squabbled and fought with one another continually over thrones and territory. The frequent wars among Europe's feuding monarchs reduced towns and farmland to smoking ruins, killed or starved the people, and left rulers with huge debts that they paid by raising taxes, debasing the coinage, or simply seizing the wealth of convenient victims like Jews. At the center of Europe lay the Kingdom of France, a vast realm that took twenty-two days to cross from north to south, and sixteen days from east to west. France, the forge of feudalism, had endured for nearly ten centuries. Founded amid the ruins of Roman Gaul in the fifth century, it had been Charlemagne's fortress against Islamic Spain in the ninth, and it was Europe's richest, most powerful nation at the start of the fourteenth. But within a few decades Fortune had turned against France, and the nation was now desperately fighting for its survival. In 1339 the English crossed the Channel and invaded France, beginning the long, ruinous conflict that would be known as the Hundred Years' War. After cutting down the flower of French chivalry at Crecy in 1346, the English captured Calais. A decade later at Poitiers, amid another great slaughter of French knights, the English seized King Jean and took him to London, releasing their royal prisoner only in exchange for vast French territories, many noble hostages, and promises to pay a colossal ransom of three million gold ecus. Stunned by the loss of its king and what it cost to buy him back, France fell into civil war. Rebellious nobles betrayed King Jean and joined with the English invaders, peasants enraged by new taxes rose up to murder their lords, and the volatile citizens of Paris split into feuding factions and butchered one another in the streets. Chronic droughts and crop failures added to the misery of the people. And the Great Plague that carried off a third of Europe in 1348-49, leaving unburied corpses scattered over fields and stacked in the streets, kept returning every decade or so for another grim harvest. As Death stalked the land, pictured by artists of the time as a shrouded skeleton wielding a great scythe, and as black warning flags flew from belfries in plague-stricken villages, God Himself seemed to have abandoned France. When the Great Schism shook Europe in 1378, dividing Christendom into two warring camps led by rival popes in Rome and Avignon, the Roman pope blessed England's cruel and mercenary war of conquest in France, as English clerics preached a new "crusade" and sold indulgences to finance the slaughter of French "heretics." Conquering English armies were followed into France by criminals and outlaws from all over Europe, bands of savage men known as routiers, or "the scourge of God," who roamed the countryside looting towns and villages and extorting tribute from the terrorized people. Amid the violence and the anarchy, France threw itself into a frenzy of fortificaJager, Eric is the author of 'Last Duel A True Story of Crime, Scandal, and Trial by Combat in Medieval France', published 2004 under ISBN 9780767914161 and ISBN 0767914163.