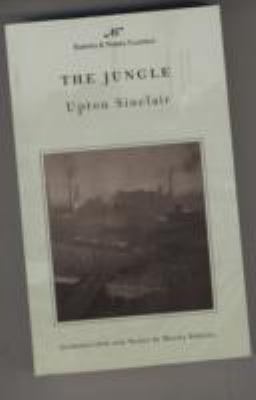 From Maura Spiegel's Introduction toThe Jungle Upton Sinclair described the site of Chicago's meatpacking industry, Packingtown, as "the greatest aggregation of labor and capital ever gathered in one place." The supreme achievement of American capitalism, Sinclair would undertake to reveal, was also its greatest disgrace. At the age of twenty-six, Sinclair set out to writeThe Junglein the spirit of Saint George battling the dragon. His was an age of capitalist Titans, of magnates whose wealth, power, and hubris seemed unlimited: A single man owned a million acres of the Texas Panhandle, an American coal tycoon attempted to buy the Great Wall of China, and in the Midwest a combination known as the Beef Trust tightly controlled the production and sale of meat through pervasive wage and price fixing and the unrelenting exploitation of the stockyard workforce. Sinclair's was also an age when writers, both journalists and novelists, were experiencing a thrilling sense of their own efficacy. The investigative expose-what President Theodore Roosevelt would unflatteringly dub "muckraking," after the character in John Bunyan'sThe Pilgrim's Progress(1678, 1684) who could "look no way but downward, with a muckrake in his hands"-had taken the magazine and publishing world by storm, had grabbed hold of the popular reader, and was shining a bright light on the ever-darkening realms of child labor, prisons, insurance companies, and, foremost, American enterprise and its role in the creation of a new American class of impoverished industrial wage slaves. With their tremendous descriptive and explanatory power, books such as Henry Demarest Lloyd'sWealth against Commonwealth(1894), a study of American business syndicates and trusts, Ida Tarbell'sHistory of the Standard Oil Company(1904), and Lincoln Steffens'sThe Shame of the Cities(1904), an expose of municipal corruption and the ties between government and business in six American cities, had a significant impact on public debate, turning uncertainty into indignation and despair into outrage. Combining rigorous research and firsthand reporting with moralistic rhetoric, these works revealed how the contemporary world worked, how businesses were being transformed into empires, and how these empires were bleeding the public in an exploitative relationship starkly delineated by Lloyd on the first page ofWealth against Commonwealth(see "For Further Reading"): "Holding back the riches of earth, sea, and sky from their fellows who famish and freeze in the dark, they [the syndicates and trusts] . . . assert the right, for their private profit, to regulate the consumption by the people of the necessaries of life, and to control production, not by the needs of humanity, but by the desires of few for dividends." Energized by their sense of mission, these journalists also understood that at that moment, when magazines and books were reaching wider audiences than ever before, there was no more powerful means at their disposal than the written word. They had a confidence in the power of their medium that writers seldom experience today. Not yet competing with motion pictures, either dramatic or documentary, these writers seemed to understand that, for the moment at least, the written word was the document of truth. Even photographs could not vie with narrative for getting at what was real. Consider, in this regard, the reader's first exposure to the packing yards inThe Jungle, when Jurgis and his family take a tour. As spectators, outsiders, what they see is an immensely impressive system; Jurgis himself is full of admiration; the family is "breathless with wonder" at the magnitude, the efficiency; "it seemed to them impossible of belief that anything so stupendous could have been devised by mortal man." This first impression, like a panoramic set of photographs, lacked narrative dimension.Sinclair, Upton is the author of 'Jungle', published 2003 under ISBN 9781593080082 and ISBN 1593080085.

9 from $0.30
Loading marketplace prices 9 copies from $0.30 How does the rental process work?
View more