Janet Evanovich's How I Write Secrets of a Bestselling Author 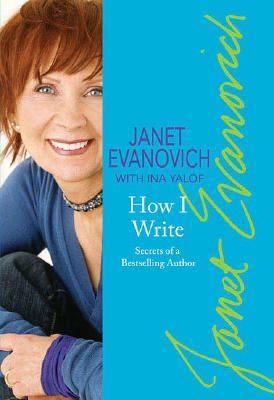 When I was a kid I spent a lot of time in LaLa Land. La la Land is like an out-of-body experience --while your mouth is eating lunch your mind is conversing with Captain Kirk. Sometimes I'd pretend to sing opera. My mother would send me to the grocery store down the street, and off I'd go, caterwauling at the top of my lungs. Before the opera thing I went through a horse stage where I galloped everywhere and made holes in my Aunt Lena's lawn with my hooves. Aunt Lena was a good egg. She understood that the realities of daily existence were lost in the murky shadows of my slightly looney imagination. After graduation from South River High School, I spent four years in the Douglass College art department, honing my ability to wear torn Levis, learning to transfer cerebral excitement to primed canvas. Painting beat the heck out of digging holes in lawns, but it never felt exactly right. It was frustrating at best, excruciating at worst. My audience was too small. Communication was too obscure. I developed a rash from pigment. Somewhere down the line I started writing stories. The first story was about the pornographic adventures of a fairy who lived in a second rate fairy forest in Pennsylvania. The second story was about ...well never mind, you get the picture. I sent my weird stories out to editors and agents and collected rejection letters in a big cardboard box. When the box was full I burned the whole damn thing, crammed myself into pantyhose and went to work for a temp agency. Four months into my less than stellar secretarial career, I got a call from an editor offering to buy my last mailed (and heretofore forgotten) manuscript. It was a romance written for the now defunct Second Chance at Love line, and I was paid a staggering $2,000. With my head reeling from all this money, I plunged into writing romance novels full time, saying good-by, good riddance to pantyhose and office politics. I wrote series romance for the next five years, mostly for Bantam Loveswept. It was a rewarding experience, but after twelve romance novels I ran out of sexual positions and decided to move into the mystery genre. spent two years retooling --drinking beer with law enforcement types, learning to shoot, practicing cussing. At the end of those years I created Stephanie Plum. I wouldn't go so far as to say Stephanie is an autobiographical character, but I will admit to knowing where she lives. In '95 my husband and I moved to New Hampshire. We bought a big 'ol house on the side of a hill, not far from Dartmouth College. I have a nice view of the Connecticut River valley from my office window and there's a couple acres of land around the house. It's a good place to write a book ... and would be even better if we just had a decent mall. You can take the girl out of Jersey, but you can't take Jersey out of the girl. When we moved to New Hampshire we realized there was more to this writing stuff than just writing, so we formed a family business, Evanovich, Inc. My son, Peter, a Dartmouth College graduate, assumed responsibility for everything financial. He's the guy who pulls his hair out at tax time and cracks his knuckles when the stock market dips. In '96 my daughter Alex, a film and photography school graduate, came on board and created the website. We get about four and a half million hits a month on the site and Alex does it all ... the graphics, the mail, the comics, the store, the online advertising and the newsletter. Both Peter and Alex work full-time for Evanovich, Inc. I'm their only client. My husband, Pete, has his doctorate in mathematics from Rutgers University and now manages all aspects of the business and tries to keep me on time (a thankless, impossible job!) ... plus he does a little golfing and skiing. It turns out I'm a really boring workaholic with no hobbies or special interests. My favorite exercise is shopping and my drug of choice is Cheeze Doodles. I read comic books and I only watch happyEvanovich, Janet is the author of 'Janet Evanovich's How I Write Secrets of a Bestselling Author' with ISBN 9780312354282 and ISBN 0312354282.