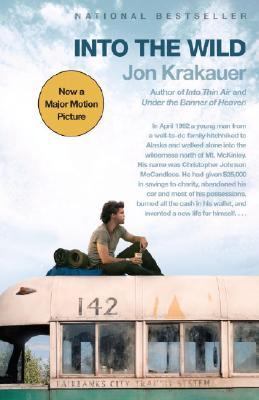 THE ALASKA INTERIOR April 27th, 1992 Greetings from Fairbanks! This is the last you shall hear from me, Wayne. Arrived here 2 days ago. It was very difficult to catch rides in the Yukon Territory. But I finally got here. Please return all mail I receive to the sender. It might be a very long time before I return South. If this adventure proves fatal and you don't ever hear from me again I want you to know you're a great man. I now walk into the wild. --Alex. (Postcard received by Wayne Westerberg in Carthage, South Dakota.) Jim Gallien had driven four miles out of Fairbanks when he spotted the hitchhiker standing in the snow beside the road, thumb raised high, shivering in the gray Alaska dawn. He didn't appear to be very old: eighteen, maybe nineteen at most. A rifle protruded from the young man's backpack, but he looked friendly enough; a hitchhiker with a Remington semiautomatic isn't the sort of thing that gives motorists pause in the forty-ninth state. Gallien steered his truck onto the shoulder and told the kid to climb in. The hitchhiker swung his pack into the bed of the Ford and introduced himself as Alex. "Alex?" Gallien responded, fishing for a last name. "Just Alex," the young man replied, pointedly rejecting the bait. Five feet seven or eight with a wiry build, he claimed to be twenty-four years old and said he was from South Dakota. He explained that he wanted a ride as far as the edge of Denali National Park, where he intended to walk deep into the bush and "live off the land for a few months." Gallien, a union electrician, was on his way to Anchorage, 240 miles beyond Denali on the George Parks Highway; he told Alex he'd drop him off wherever he wanted. Alex's backpack looked as though it weighed only twenty-five or thirty pounds, which struck Gallien--an accomplished hunter and woodsman--as an improbably light load for a stay of several months in the backcountry, especially so early in the spring. "He wasn't carrying anywhere near as much food and gear as you'd expect a guy to be carrying for that kind of trip," Gallien recalls. The sun came up. As they rolled down from the forested ridges above the Tanana River, Alex gazed across the expanse of windswept muskeg stretching to the south. Gallien wondered whether he'd picked up one of those crackpots from the lower forty-eight who come north to live out ill-considered Jack London fantasies. Alaska has long been a magnet for dreamers and misfits, people who think the unsullied enormity of the Last Frontier will patch all the holes in their lives. The bush is an unforgiving place, however, that cares nothing for hope or longing. "People from Outside," reports Gallien in a slow, sonorous drawl, "they'll pick up a copy ofAlaskamagazine, thumb through it, get to thinkin' 'Hey, I'm goin' to get on up there, live off the land, go claim me a piece of the good life.' But when they get here and actually head out into the bush--well, it isn't like the magazines make it out to be. The rivers are big and fast. The mosquitoes eat you alive. Most places, there aren't a lot of animals to hunt. Livin' in the bush isn't no picnic." It was a two-hour drive from Fairbanks to the edge of Denali Park. The more they talked, the less Alex struck Gallien as a nutcase. He was congenial and seemed well educated. He peppered Gallien with thoughtful questions about the kind of small game that live in the country, the kinds of berries he could eat--"that kind of thing." Still, Gallien was concerned. Alex admitted that the only food in his pack was a ten-pound bag of rice. His gear seemed exceedingly minimal for the harsh conditions of the interior, which in April still lay buried under the winter snowpack. Alex's cheap leather hiking boots were neither waterproof nor well insulated. His rifle was only .22 calKrakauer, Jon is the author of 'Into the Wild Movie-tie-in', published 2007 under ISBN 9780307387172 and ISBN 0307387178.